2017 – what a year this has been for me and my Rock Gods!  Never in my life have there been so many concerts, new albums, and activity from so many of my favorite musicians all in the same year. There is just so much to be grateful for! But don’t worry – this isn’t just about U2..  though…

…It All Begins And Ends With U2

The year began with U2 announcing their Joshua Tree Tour and has ended with their new album Songs of Experience and a host of singles and promotional events, including the amazing BBC special aired throughout the last days of this year.

The year in between was peppered with a large number of U2 shows and events-  5 concerts of which I was lucky enough to attend in real life:

And countless others I watched/listened to online via Periscope and Mixlr, thanks to the kindness and community of fellow U2 fans that streamed the shows for those of us stuck at home.  I cannot say enough about the U2 fan community – there is nothing else quite like us, and I am so grateful to have met so many old and new friends online and in person this year!  I look forward to catching up and meeting even more of you on the U2 road in 2018!

The Joshua shows were a unique thing for the U2 family – U2 are well known for not reminiscing on the past – they are a forward-looking bunch of guys, always trying new things, walking on the edge (ha!) of invention and innovation. But they gave us this remarkable tour that was only supposed to be a few days and few places in celebration of this monumental album.  It ended up lasting over 50 shows, selling almost 3 million tickets, and was just recently listed as the top tour of 2017 by Pollstar.

The Joshua Tree Tour was whatever you, as audience member, made of it.  For many it was a fun night out, a nostalgic celebration of an amazing album.  For others, maybe it was what U2 have tried so very hard to never be/give, a greatest hits tour by a greatest hits band.

But for me, and so many many fans, this tour pulled the heartstrings, awed the senses, preached for love, community, and higher ground, modelled joyful defiance, and became an anthem for humanity.  The music of The Joshua Tree morphed from a portrait of the political era of Reagan/Thatcher into a megaphone for sanity and hope in this new Trump/Brexit world. It, the band, and that massive screen, moved us. And it gave us a glimpse of the future, Songs of Experience.

In addition to the Joshua Tree shows and new album, the fans united online for the first annual International Day of U2 on September 25, the anniversary of the first band meeting in Larry’s kitchen.

Inspired by Duran Duran’s Appreciation Day and the U2 40th year anniversary celebrations held in 2016, the idea was (is) simply to do something U2-ey on that day and post about it on social media so the larger U2 community can share in the experience.  Donate, celebrate, appreciate (isn’t this an INXS song?? “Hallucinate. Desegregate. Mediate. Alleviate. Try not to hate…”) – just wear a shirt or post your favorite picture – whatever, however you want to participate.

Little did I know that there was already a U2 T-shirt Day and 41st anniversary tribute gigs in the works! The complete effect of all the U2 love made for a rather enjoyable day!  I can’t wait for next year! #U2Day18 !!  I’ll attempt to track events around the world here.

If You Build It, They Will Come 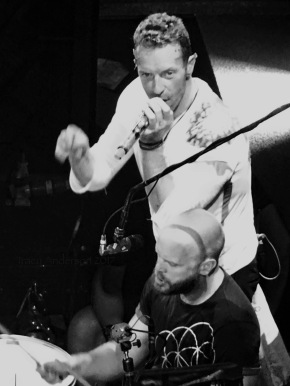 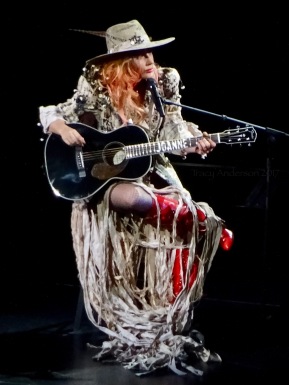 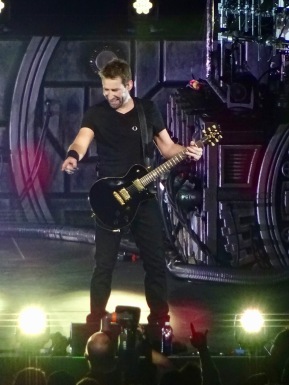 Sure, the movie was talking about baseball, but when the doors to Edmonton’s new arena, Rogers Place, officially opened on September 8, 2016, the Rock Gods just came a-runnin into town!  Seriously, I have never seen so many concerts in town, one after the other.

Rogers Place is a (Rock)Godsend to the downtown core. Once known as Deadmonton, this big little city is becoming quite the epi-center of entertainment and the good life.  Already known for its impressive food scene, and die-hard sports fans, we now have a state of the art, architecturally stunning arena for sports, concerts, and more.

And 2017 has definitely been the year for Rock God worship at this lovely new temple of music, I personally managed to get to 6 shows at this venue this year: 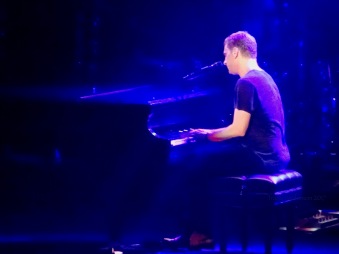 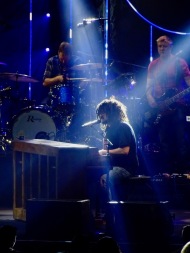 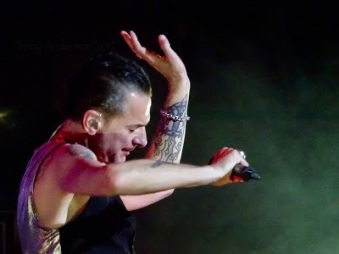 When I count my blessings, this new arena is high on my list.  Having been to a number of arenas and stadiums in the USA and Europe, I also count its downtown location and closeness to frequent and late public transportation even higher on that list (seriously, who designs structures that hold tens of thousands of people and then places them outside of the major city, far from public transportation or stops that transportation and its connections before all people can get home??? Also, thank you Rogers Place for having indoor plumbing for customers… Who knew not all arenas/stadiums do this!?)

I also saw a handful of shows at other venues in Edmonton: 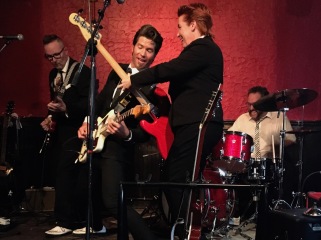 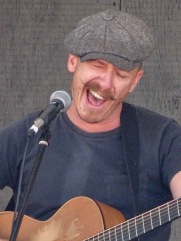 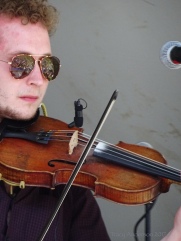 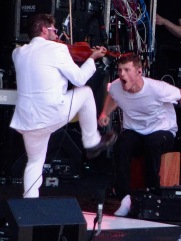 All of these tours were significant for me – it was the first time I had seen Duran Duran, Counting Crows, MatchBox 20, Lady Gaga, Nickleback and Depeche Mode live. 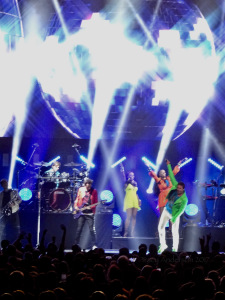 Duran Duran shook my world.  I went from being a nostalgic fan with only a handful of their greatest hits on my iTunes, to being a total fangirl and owning their latest album and almost the entire back catalogue.

[I’ll get the rest eventually, but U2 is taking all my money at the moment and all of my ears (seriously – I can’t stop listening to the new album, though I have added in the companion Songs of Innocence to get the full Experience (ah ha ha – I kill me!))].  They are another band I won’t ever miss on tour again and will travel to see…

The Tea Party… speaking of bands I’ve never miss again… I have such a love for this band, they hold a special place in my heart.  Their tour this year was another noteworthy anniversary celebration of a mammoth album, an album that had and continues to have an immense impact on my life and music-ness – 20 Years of Transmission.  Seeing this album played live was… well I think I am still deeply enthralled by the experience.  As I’ve blogged before, this band is a perfect storm of rock, world music, insightful/ intelligent/ often esoteric/ lyrics, Jeff Martin’s beautiful beautiful voice, and the ingenious soundscapes of Jeff Burrows and Stuart Chatwood.

Also, this show had Jeff Martin and 3000 Edmontonians singing their hearts out to U2’s With or Without You… I still sigh deeply at the thought.  I love it when my loves mingle. 😀

This show, and my sister’s need for me to have another venue for my Rock God ravings, was the inspiration for this blog. And this blog is definitely high on this year’s blessings as well.  Though it consumes hours of my time in what feels like seconds, I love it.  I love writing about my Rock Gods, I love sharing my thoughts and I truly truly love receiving the responses and thoughts of those who read it.  I love the conversation and interaction – so please keep your comments coming!

I had a blast guest blogging on Almost Predictable. Almost.  for the Depeche Mode concert.  The idea of having a post per each and every show on DM’s Global Spirit Tour, is just brilliant!  What a way to archive a tour!

All of the shows gave me a sense of joy and happiness that I do not experience elsewhere in life – I truly love music, and I thrive on live music.  Much like the Grinch’s heart at Christmas, my heart swells three times larger during, and for a significant time after, a concert by one of my Rock Gods.  The positive high carries me for days, months…

All of the shows deepened my love of music and, with this blog as a new platform, instilled a greater love in me for concert photography and writing. 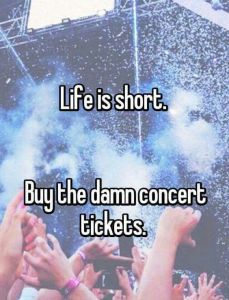 There were many anxious moments over the year where I hemmed and hawed over whether or not to go to this or that show; there were so many, none of them really cheap, some of them more expensive than I could afford, but all of them a reminder that life is short, just buy the damn tickets.

This is especially true, and hits home ever-more-so-deeply, after 2016’s dismal procession of musician deaths and my own scare a couple of years before, mixed with this year’s loss of Gord Downie, Chris Cornell, Chester Bennington and Tom Petty and the tragic, senseless mass shooting at an outdoor concert in Vegas and bombing at Ariana Grande’s concert in Manchester to name a few.

These events stoke the joyful defiance. We must enjoy life. We must not cower in fear. Yes, there is darkness in the world, but music brings the light.

Music soothes our souls.  Music is my soul.  This year, more than others in the past, music has given me a community, a family, of like-minded souls.  Live music, combined with the Internet and travelling to these shows, has enabled me to meet and make friends around the world who share this love of music, travel, and life.

I have been deeply blessed by the Rock Gods this year. And 2018 is looking just as promising.

I will see you ‘on the road’ somewhere…

Tagged as: Concerts, Duran Duran, International Day of U2, Rogers Place, The Tea Party, U2, U2 Day, U2 The Joshua Tree Tour 2017, Year End Review