I may have a bit of a pedestal for U2…  After all, Rock Gods and pedestals go hand in hand, microphone to amp, guitar to wah wah pedal. But here’s the thing – U2 have earned that pedestal over the past 40 years (well, 30 years for my particular pedestal), and they keep earning it. My pedestal and these Rock Gods are not perfect, though. They are flawed. They are human (the Rock Gods, not the pedestal…) and they err. But to err is devine. To be flawed is to spark creativity; to allow the space for genius to arrive.

And my boys are genius. Every tour, every show I see confirms this theory and secures my pedestal.  Last night’s show in Santa Clara (San Francisco, but not) was no exception.  These lovely men are on form.  Bono’s voice is like the nectar of the gods! (Ok, that may be a tad dramatic, but he sounds truly magnificent!) Clear, passionate, perfect.  The Edge, sonic guru; I don’t know how he brings the feels through those guitars, but he does… Larry,  the heartbeat of the band; again, I am struck deeply by him coming out first and starting the show alone, one man and his drum started this all and starts this show… poignant! And Adam… the jazz man.  He is the walking embodiment of ‘cool.’

It is almost exactly the same set list as Vancouver, with one, super important difference. Bad… I heard they played it in Seattle, I hoped they would play it last night… And they did! This song. This song, live. Ah, this song! There are many U2 songs where, from the first note, I am transported emotionally to levels and places I didn’t know possible through music. This song is high on that list. Those opening notes of The Edge’s guitar are instantly recognizable and hit to the core with the hopelessness and helplessness Bono is soon to sing about… The passion that Bono sings with in this song is unreal…. “If I could, I would, let it go. Surrender… Dislocate… If I could throw this lifeless lifeline to the wind. Leave this heart of clay…” Larry’s drums and Adam’s bass, sure and steady, giving support for the anguish of the guitar and voice. Only for all to crescendo into the desperate cry for release: “Let it gooo, let it go. I’m wide awake, I’m not sleeping.” Heart wrenching… jeez, the feels in this song. Live, this is all magnified exponentially – to hear this despair through all four of this band and 20,000 – 50,000 others, to SEE this emotion whipping into frenzy in their faces, unbelievable! This time, in Santa Clara, it was just the four of them, and a blue light. No screen, no theatrics, nothing but U2 and us. Beautiful…

Something happened last night at the beginning of With or Without You. All of a sudden Bono stopped singing, I’m not sure why but he later says ‘Adam…’ and Adam is smiling brightly, cool, calm. I think he was playing ‘wrong’ somehow… though my nonmusical ears couldn’t figure it out… so they play just the music for awhile to sort it out and then Bono says to us “ok, you can start singing again” with a chuckle. That’s my boys, imperfect Rock Gods. (I just read maybe it had something to do with Adam’s ear monitor…?) Once firmly in the song, Bono goes to hang out with Adam, leaning on him, almost like saying “Hey you good? No worries – we are good, all is well.” And the show goes on. 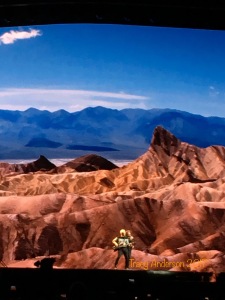 The thing about my pedestal and my U2 Rock Gods is that they are firmly rooted in this kind of human and humility.  Consider also this story of a fan who ran into Bono at a restaurant, he asked her her opinion of the show, wanting to know if she liked it, if it worked for the fans. (It does!) If any band could sit back and rest on their laurels, it is this band. They are the hot ticket this summer. The Joshua Tree is charting on iTunes. And, again, 40 year career with a massive amounts of hits and successful tours under their belts. But they don’t rest on that success. They never have. They strive for whatever it is they are looking for. They have said before that they believe their best work is yet to come, that they are still learning, still “ambitious creatively”… This, from the band that brought us TJT and Achtung Baby… and War, and… They care enough about their artistry and their fans to aim to create the best music and live shows that they can, this show included.

This show, by the way, was my first GA where I didn’t go stand in line all day or rush for the closest spot I could get… Me, impatient, must be in line early (but not toooo early), must be as close as possible to bask in the glow of my Rock Gods…  there is something strange about going against your nature…  But, I realized the day before the show that getting to and from the event was not as easy as I thought… Santa Clara, where Levi’s Stadium is located, is a 2 hour bus, train and light rail ride away from San Francisco… and there were rumours that the show was going late (they always do) and there would only be one extra train a half hour after the show ended… one extra train, for thousands of people… hmm. (I am decidedly spoiled by the proximity of Edmonton’s and Vancouver’s sporting/concert venues to public transportation and locations in the heart of the city…) So I decided to forego a possible rail location and go further away from the stage to be closer to the exit so I could get to the train faster, and to get a new perspective of the show.  I left SF at noon… my train broke down (this is why I like to leave early… things happen) so I didn’t get into line until 2:30pm! And the line was huge! It wrapped around the parking lot!

Levi’s must have learned from the BC Place fiasco because they started the security checks and wristbands around that time.  Once freshly wristbanded, we made our way to the next spot to wait for the doors to open. It all moved pretty well.  I walked at a normal pace to the floor, feeling surreal yet peaceful. But as soon as I got on the floor, I saw lots of room at the front stage to the Adam side and old habits die hard, muscle memory sinks in and I headed for that spot.. get there, realize its pretty high up and way to the side… So I turn back around and head for the rail around the main mixing deck, half way down the GA floor where I can see the whole screen.  The view was pretty good as far as the wider perspective goes.  I could fully see those amazing photographic images on the screen.  And what I hadn’t realized before was that the video motion makes the stage look like it is moving – like it is the car driving down the highway, like it was moving in and out of the trees!  Super cool!   Mind you, the super chatty, huggy guy next to me was smoking A LOT of pot during the show… so maybe I was the only one seeing that movement…

And what a host of characters I met in that spot, indeed. Not just Pot Guy, but sleeping on the floor spread out guy (who then found his burst of energy and went manic dancing around the floor (or maybe he was enjoying the second hand pot as well…) and awesome couple # 1 and 2 who were all delightful conversationalists, one of which took me under their wing to get us all back on the trains to SF (we even shared a cab to our Union Square area lodgings… – I love U2 fans!)  An interesting evening indeed.  Im not sure I’ll do the far back floor again though, at least not when I am by myself… I missed the passion and energy of the rail.  From where I was, I couldn’t hear the crowd singing along very well, couldn’t see the emotions on the band’s and fellow fans’ faces, though there was dancing, there wasn’t much crowd bouncing in unison, etc.

A different experience, a wonderful experience, but apparently, I like to be close to the stage-shaped pedestal my Rock Gods are on…

(Also, apparently I don’t know how to take clear photos from that far back… These are fuzzy!)