“If We Don’t Organize, We Agonize”: Finding the Socio-Political Messaging in U2’s The Joshua Tree Tour 2017 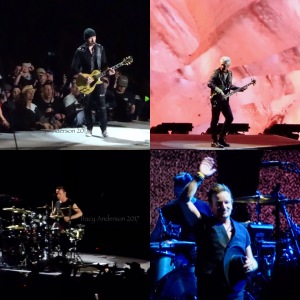 Ok. Time to get serious here. My first three shows for the U2 The Joshua Tree Tour 2017 are now done and I want to talk politics.  When U2 announced this tour they said sure it’s the 30th anniversary of this album and we want to celebrate that fact, but, more than that, these collection of songs still feel relevant today.  And they do.  That could be a compliment to the songs that have stood the test of time or a sad statement of today’s world that we haven’t grown as far as we should have over the past three decades. Maybe both.  The Joshua Tree album was born from ‘The Two Americas’ (this was even to be the title at one point) that U2 experienced in the 1980s: the promise of America – freedom, equality, and the American Dream; and the reality – class and racial divides, a drug crisis, labour disputes, American foreign policy, and the focus on capitalism over humanity.  That does sound an awful lot like today’s world. 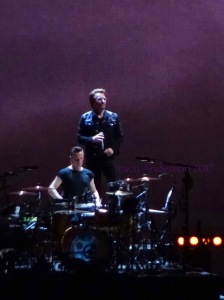 However, U2’s message has never been about losing one’s self in despair over the state of the world or in personal loss, or at least my own interpretation of their music and actions finds this to be true.  Yes, they write poignantly about moments of despair; moments of questioning one’s faith, purpose, and the way of the world, absolutely.  Stark commentary on injustice, damn right.  In fact, much of The Joshua Tree feels like a whole lot of darkness and despair.  There is deep personal sadness in One Tree Hill over the loss of one of their close friends.  Songs lamenting relationships, whether with a lover or a higher being, where you cannot live with or without them.  And of course, moments of despair at the politics during the Reagan/Thatcher time.  Yet, the overall message I get from this band and even from this album is hope, strength, and action: notice the ills of the world, witness and acknowledge the darkness, then find hope, make a plan to make it better, and do it. At the first Rose Bowl show, Bono summed it up thusly: “If we don’t organize, we agonize.  To organize is better.” (Or something like that.) 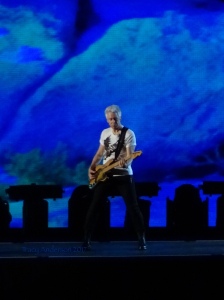 That has always been the message and is probably part of why this 30 year old album still sounds contemporary. In fact, these shows felt like U2 didn’t even have to try hard to make this tour and these songs speak to today’s world.  The four of them, a huge screen, beautiful imagery, and the songs – that’s all it takes.  (This is not to discount all the hard work and time that I’m sure went in to designing and implementing this tour – just that they didn’t need to find ways to point to the material and today’s context and say see – see – it’s still relevant!) The songs speak for themselves.

In fact they speak so well, that I first was surprised at a lack of political/social rantings from Bono during the show.  And I say that as a fan of Bono’s speeches – I love hearing his point of view and his rallying for us to do something.  I’ve said it before – the political and activist nature of this band are a significant part of why I love them to the degree that I do.  I was expecting some serious talks on this tour, some imagery to drive home the points, some cries to mobilize and save the world.  But this tour seemed a lot more subtle than in previous tours, at least during the Joshua Tree segment. And at least at first.

I mean, there are speeches – Bono talks about the One campaign and educating women. At the opener in Vancouver, he tried to get us to chant “power of the people is stronger than the people in power” (but we failed him miserably – it was too long to remember).  And there is imagery – the two most blatant being the old western clip they play leading into the song Exit, featuring a character called Trump, who tells the townspeople he will build them a wall to save them from their troubles…  One of the townspeople calls Trump a liar, which draws roars of approval from the U2 audience.  As I mentioned in an earlier blog, I first thought they overdubbed Trump’s name – but they didn’t.  It is a clip from a 1958 TV show called Trackdown. (Exit, by the way, was written from the perspective of a serial killer…  It begins with the lyrics “You know he got the cure, But then he went astray.”  I’m sure some of Trump’s promises were seen as ‘cures’ for the many who voted for him.   But man, has he ever gone astray…. I mean he was way off the track from the start as far as I am concerned, but now… wow… ) 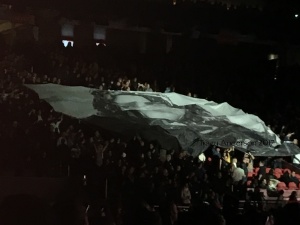 Omaima’s Flag during Ms. Sarajevo and One – We get to carry each other.

And two: the video leading into Miss Sarajevo introduces us to 15 year old Syrian refugee Omaima Thaer Hoshan and shows us the devastation of Syria and conditions of the refugee camps.  A large flag with her photo is moved hand by hand by the audience, hinting at the song to come, we get to carry each other. These images on this eight foot, massive screen are hard to deny.  Canada and the rest of the world must open our arms in support.

Yet in spite of all of these moments, for some reason the political and activist nature of this tour felt much more understated than in previous tours.  Especially in comparison with this video of Bono’s ‘conversation’ with ‘The Candidate” during Bullet the Blue Sky before the presidential election.

It is only now, as I am writing this blog and revisiting videos posted by fellow fans of the three shows I saw,  that I realize there is so much more being said through the words of the songs themselves, the images, and yes, Bono’s conversations with the audience than I first noticed.  This tour is in fact uber-political, just not always as a punch in the gut type style. The messaging starts right off the bat with the socio-political poetry that scrolls on the big screen before and after the opening acts.  Two of the works include George Elliott Clarke’s poem “Ain’t You Scared of the Sacred,” which deals with the Quebec City mosque shooting earlier this year and Rita Dove’s “Wingfoot Lake,” which addresses segregation in Ohio in1964.  (Check this link out for a list of the poems displayed during the Vancouver and Seattle shows.) 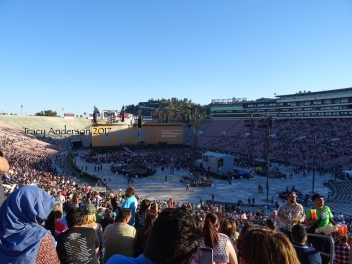 The messaging continues in some of the songs U2 chooses to play over the sound system between the opening act and their set.  In Pasadena 1, for example, they played the very blatant Where’s the Revolution by Depeche Mode (“You’ve been lied to; You’ve been fed truths; Who’s making your decisions?; You or your religion; Your government, your countries; You patriotic junkies; Where’s the revolution; Come on, people; You’re letting me down”). That’s a statement, that is!

And then as soon as U2 enters the stage, they jump right into one of their most political songs, Sunday Bloody Sunday.  And really, from that moment on, the vast majority of the songs themselves are political or comment on social issues. At various times, the issues and message are further highlighted by the imagery or by Bono: 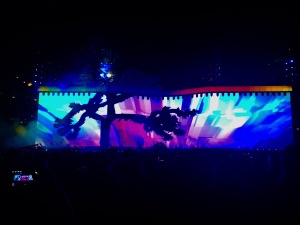 Things remain political in the encore, but we exit from the despair via Beautiful Day. Here we go!  No matter how bad things are, find the hope, celebrate life.  It truly is a Beautiful Day.  Don’t let it get away.  And in case this song doesn’t take us far enough out of the despair – let’s immediately follow it up with Elevation.  Less political, all about finding and having the joy.  There are fans that keep saying enough with Elevation – retire this song… But this song, along with Pride, I Will Follow and Streets, is an instant explosion of energy in U2 shows. 90,000 people jumping up and down in unison to the beat – off with the despair, on with the show.

And into a celebration of women with a more obvious political bend, a subtle dig at the Trump Administration’s stance on women, and the call to action by thanking those who act.  Bono thanks the women in U2’s lives, their wives, daughters, their team and he thanks the women in the audience “who we feel we know” (or something like that) for all we do.  He talks about the need to educate girls and how the One organization is working on the Poverty is Sexist Campaign. Educating girls, by the way, “creates healthier, wealthier, fairer, and more stable communities.” And he dedicates the next song, Ultraviolet, to “women who stood up or sat down for their rights, who insisted, resisted, persisted for their rights.” (Hinting at the “Nevertheless, she persisted.” statement that caught fire a few months ago.)   During this song, portraits of women who have helped change the world for the better are played across the screen.  I was struck, but not surprised, by the loud roar of support by the Pasadena audience when Michelle Obama’s portrait came up, and again when Hillary’s appeared. 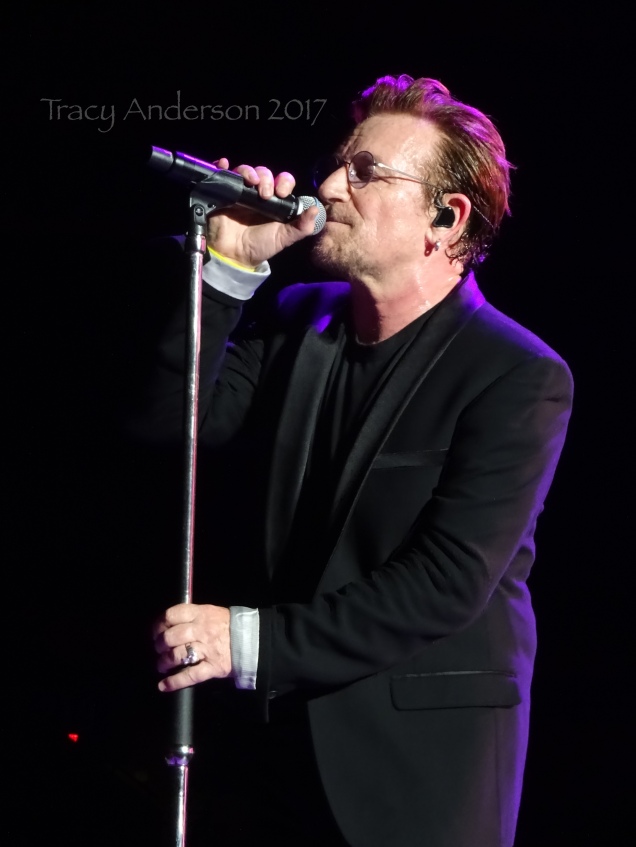 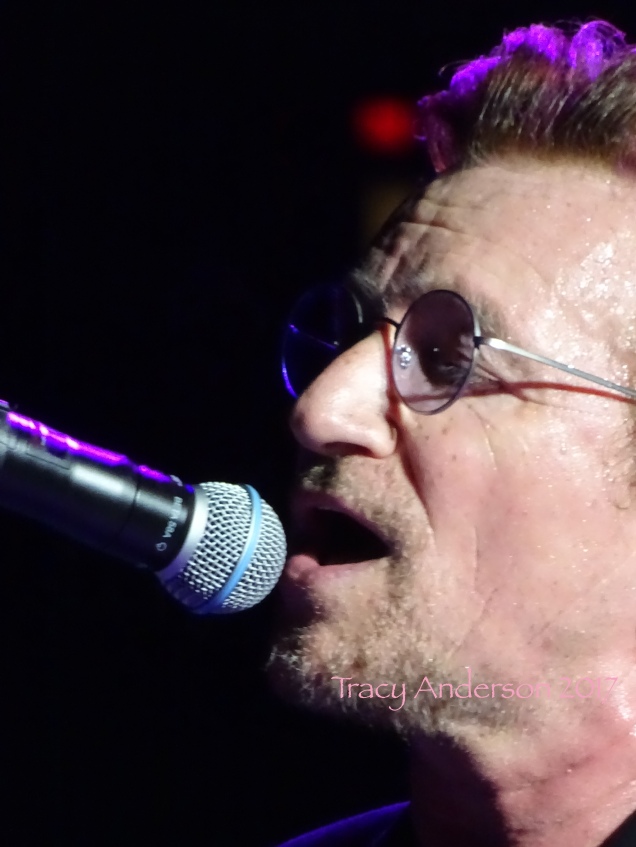 The call to action continued with One and Bono’s thanks to American people for their help in fighting against AIDS, and Bono’s reminder that government should fear the people, not the other way around because people can organize and mobilize.  In other words, stop taking this crap from the new Administration, continue to organize, and do something!  People have the power.

I love these boys. (In case you hadn’t caught that yet.)  I love the music.  Love Bono’s voice.  But I love that they use their position to stand up for what they believe in (which usually matches my beliefs) and to inspire their audience to become involved as well. What seemed at first a toned down, subtle political tour (which would have been a fair position to take considering, as Bono acknowledges and appreciates in the concert, they are guests in America – though most, if not all of them have property and spend quite a lot of time in the US), ends up being a heart-felt message that yes, things might seem pretty bad, but don’t despair. There is hope, America and the world are beautiful, full of promise, and full of hope.  We have accomplished so much already by uniting and working together.  Human rights have come a long way, ending the AIDS epidemic has come along way, labour rights, etc.  We can take it further.  Organize, don’t just agonize.

Like Loading...
Categories: Live MusicTags: BC Place Stadium, Concerts, Music and Politics, One, Pasadena Rose Bowl, Poverty is Sexist, Rock Gods With a Conscience, The Joshua Tree, The Joshua Tree Tour 2017, U2