Gaga for Gaga in Edmonton 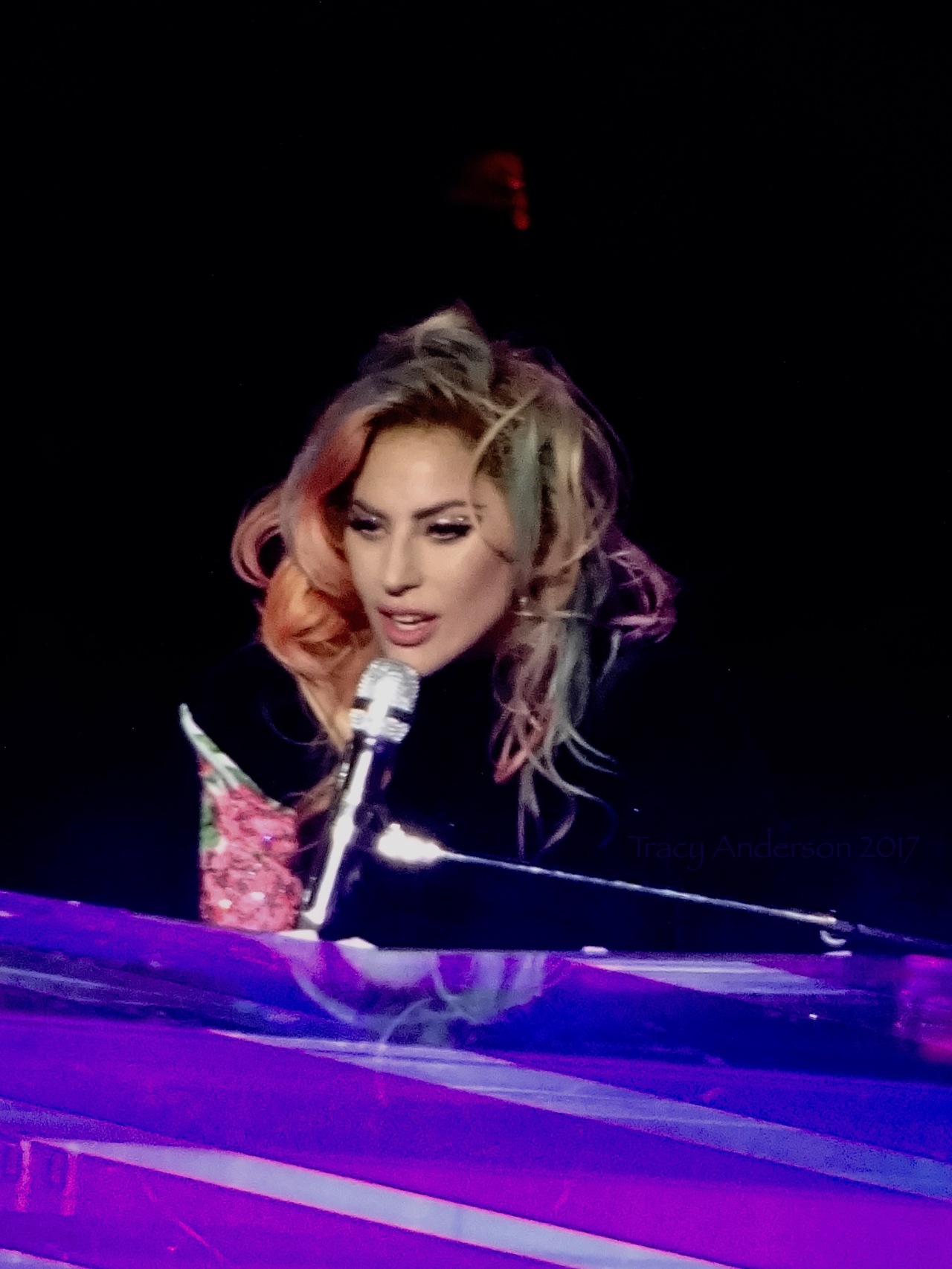 Who jumps off of a plane after seeing concerts in Europe only to go to another concert a day later??  Crazy people, that’s who!  Me, that’s who!

I mean, what can you do?  I already had my U2 in Europe holiday booked when Lady Gaga announced her Joanne World Tour dates.  Her Edmonton date, August 3, 2017 (at Rogers Place), was pretty much 24 hours after I got home…  But my theory was: I’m not gonna miss Gaga! And I’m certainly NOT going to cancel my U2 trip, or change the dates (their last show was the night before my flight).  So I bought the ticket and went to Gaga, a little bit jet lagged… a lot jet lagged.  Such is the life of Rock God Seekers, Concert Addicts and Music Junkies.  I love my life! 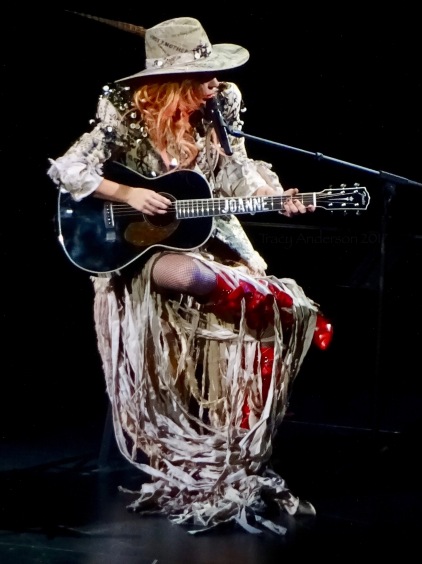 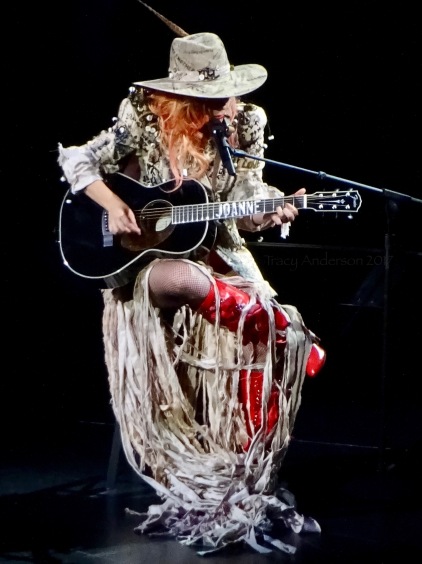 Anyways, Gaga was amazing.  This is no surprise.  Some people are just born to perform.  And baby, she was born that way! I was expecting stunning theatrics, spectacular costumes, and fantastic music.  Oh boy, did she deliver on all counts!

When my friends and I peaked in at the stage, we immediately said, holy crap there are trampolines across the floor! 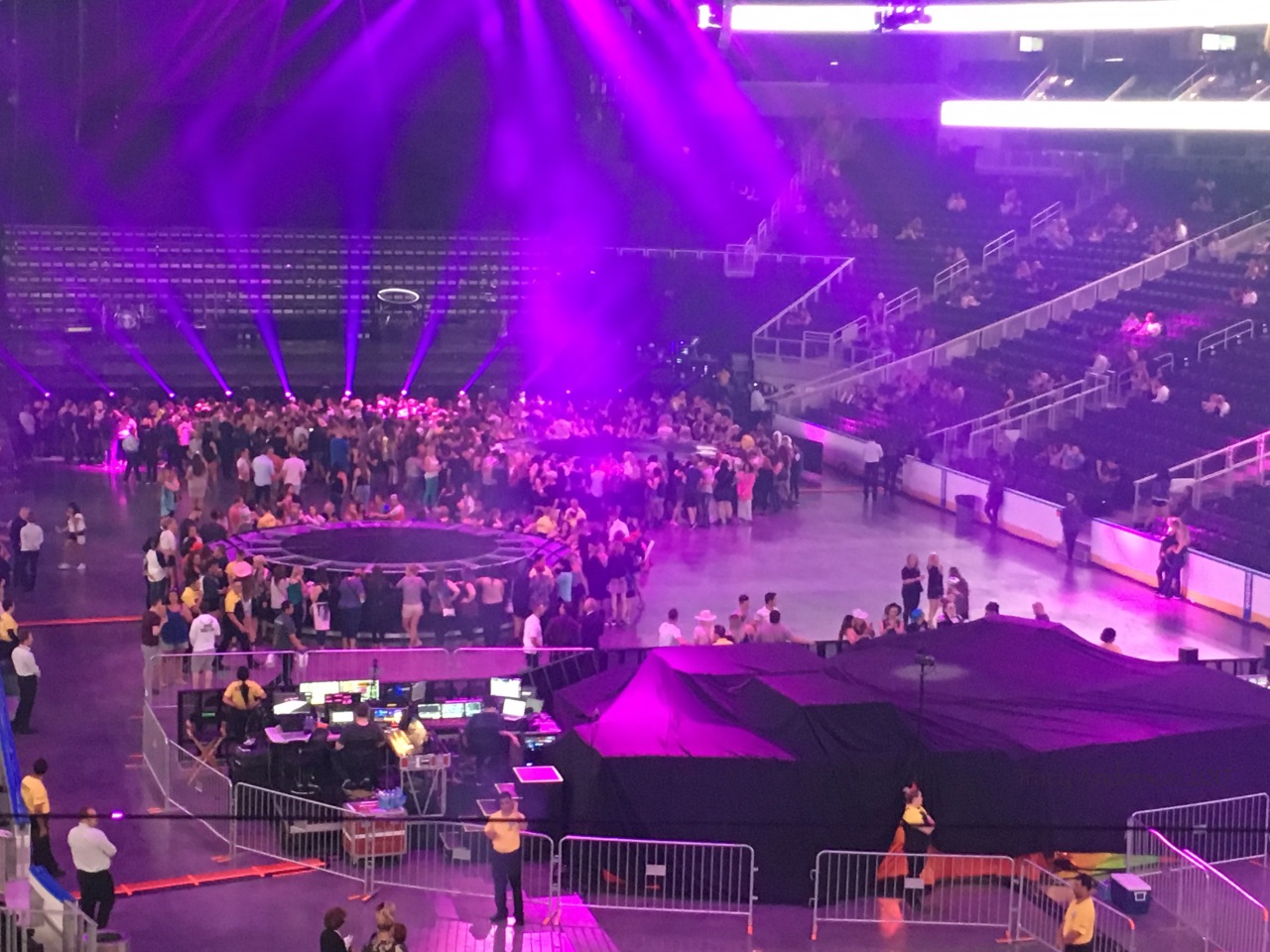 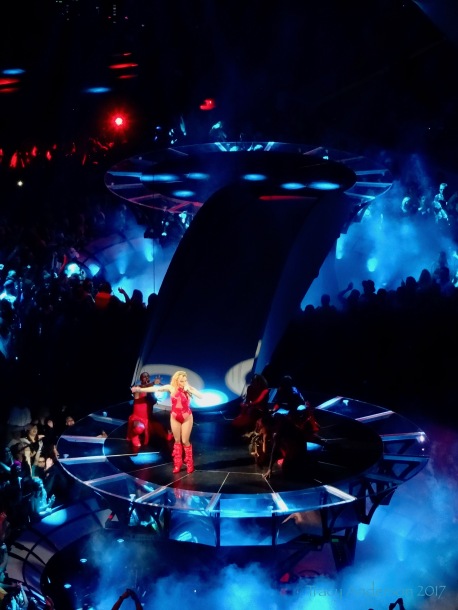 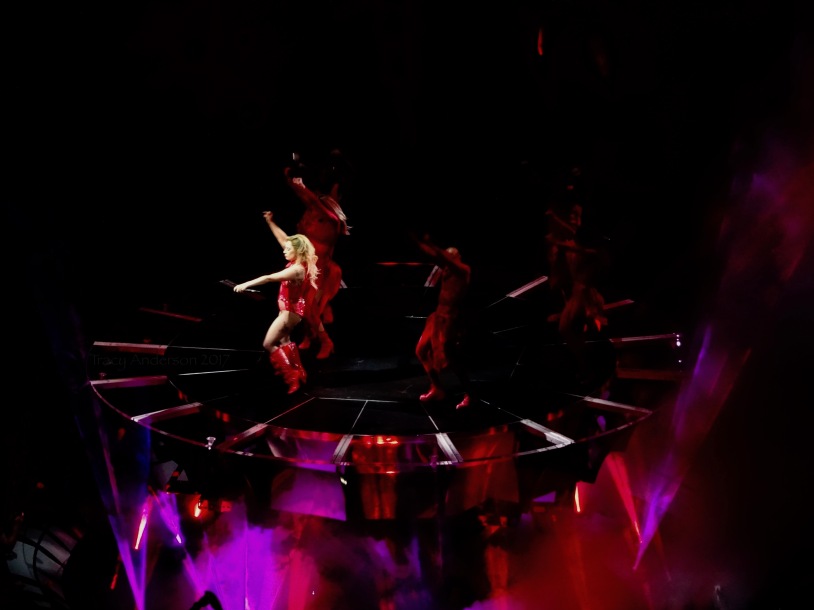 Still, the stages and the performance were plenty theatrical sans trampolines.  The main stage had numerous hydraulics that created different stage levels and tilted those levels diagonally.  The B and C stages also raised and lowered to different heights.  Even when not in use as stages, they were used as part of the lighting spectacle, sending columns of lights into the arena. 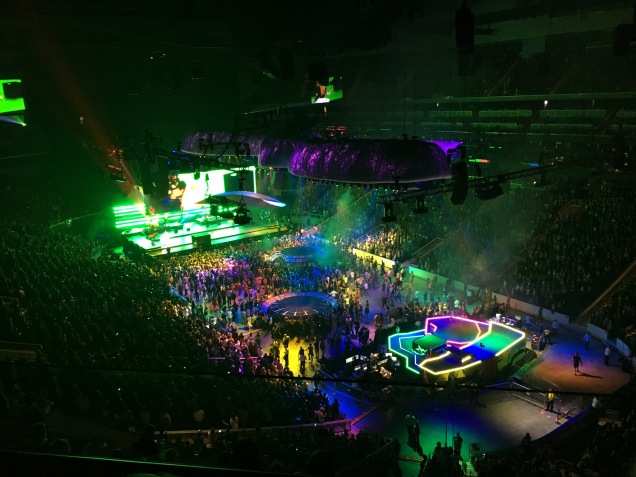 And Gaga’s piano on the D stage… I mean, just look at this piano! And of course, the story-telling through the songs, dancers, and visuals all led to the captivating theatrics. 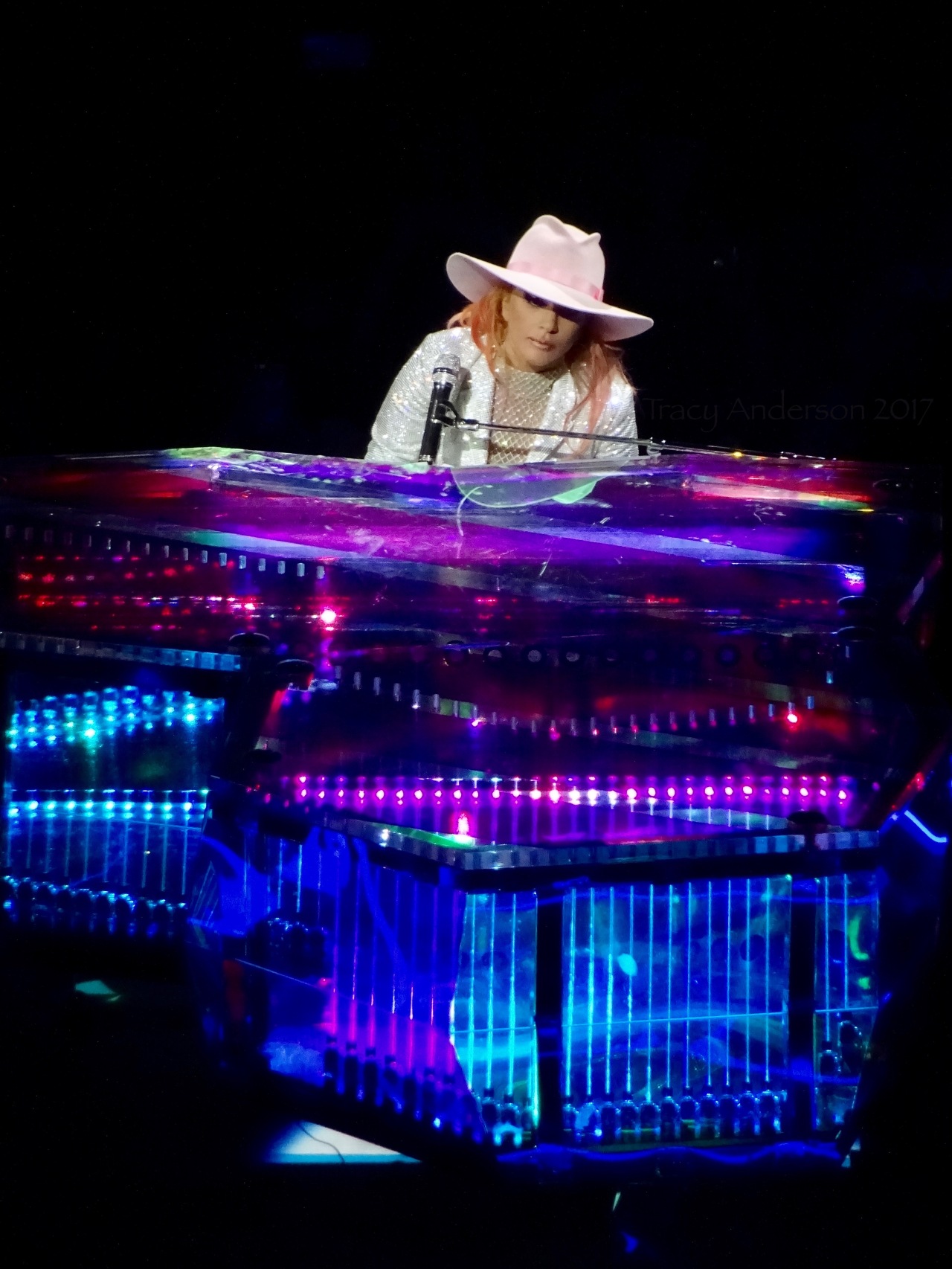 There were several costumes, in full Gaga panache – glamorous, glittery, iconic. As a former wannabe Fashion Designer for the Stars, I adore musicians that marry fashion with their music.  Fashion and music just go hand in hand, like rock stars and models (ha ha!). Gaga’s garbs were glorious.  (Good God, how many Gs can I fit in that sentence!?) 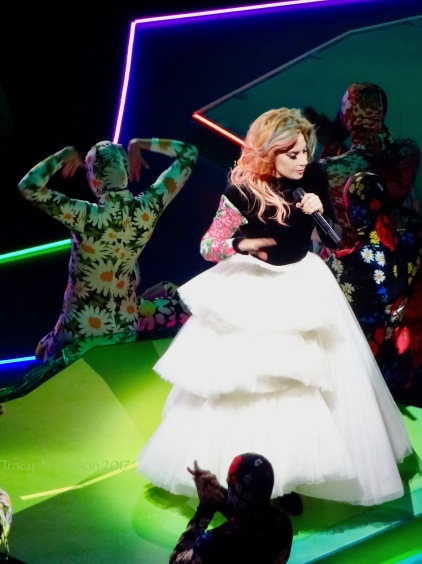 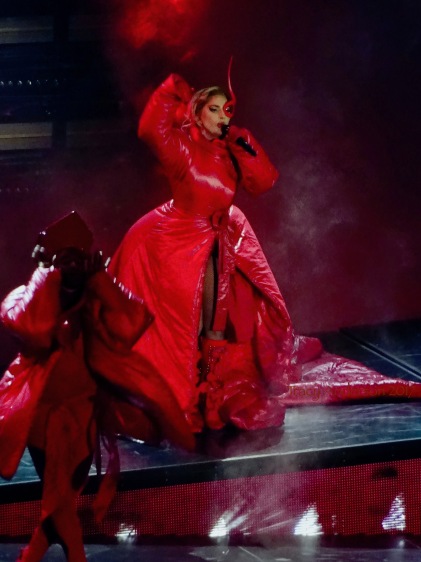 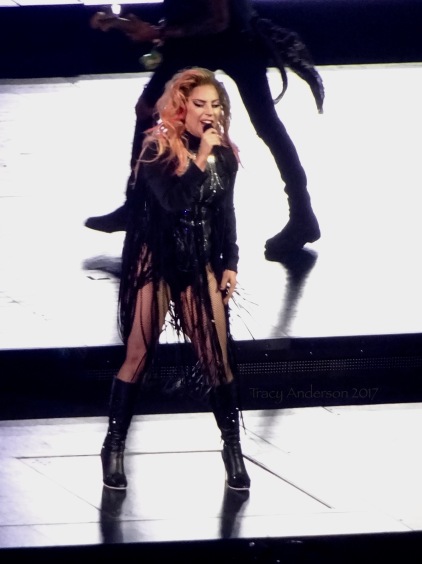 And the music.  There is no doubt, whether you like her music or not, and I do, that this woman is a remarkable talent. She is a gifted pianist alone, but add to that guitar, singing, writing, producing, dancing, etc…  She is a singular artist, this one. 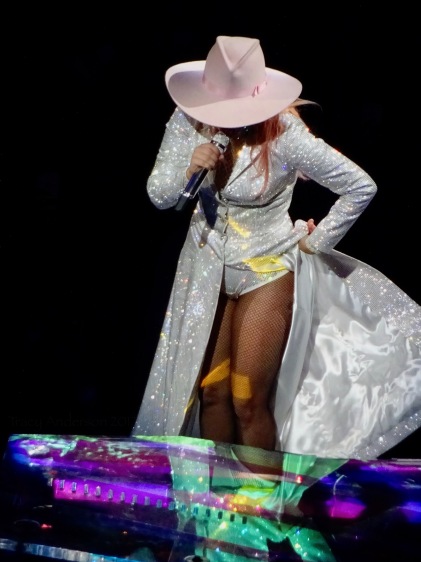 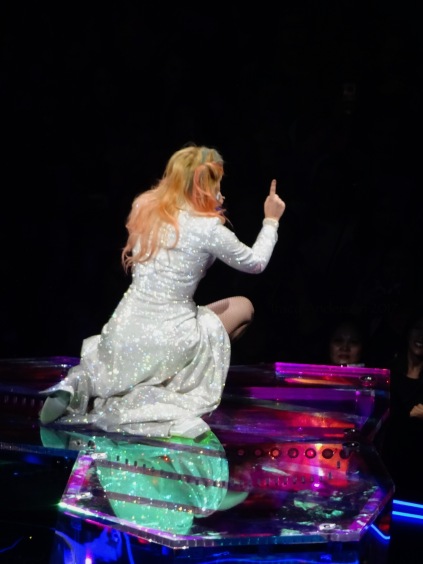 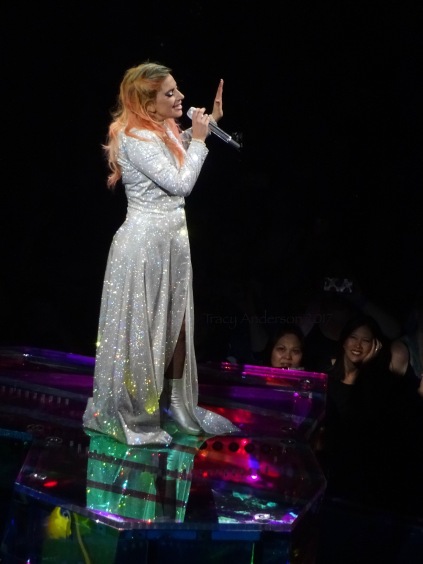 And I thoroughly love how she encourages others to reach for their dreams. She stopped a song to address someone in the crowd who shouted how talented Lady Gaga was, Gaga thanked this person and then noted the importance of perseverance when you have a dream.   She also co-founded the Born This Way Foundation, which “is committed to supporting the wellness of young people and empowering them to create a kinder and braver world.” Rock Goddess with a Conscience.

The Edmonton show was only the second of the tour, and already so polished. If you get a chance to go see her on this tour, GO!

As one of my friends said: “OMGAGA!” 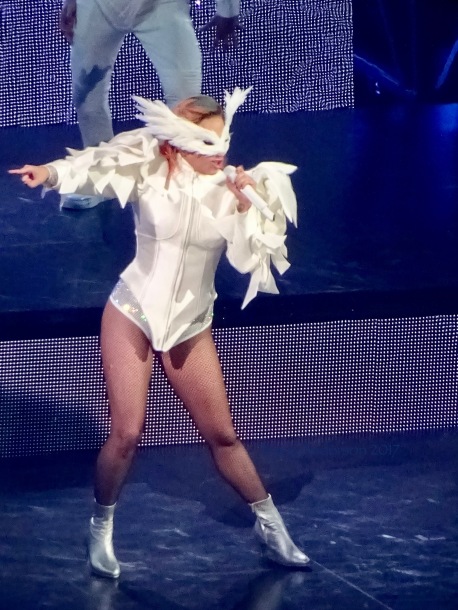 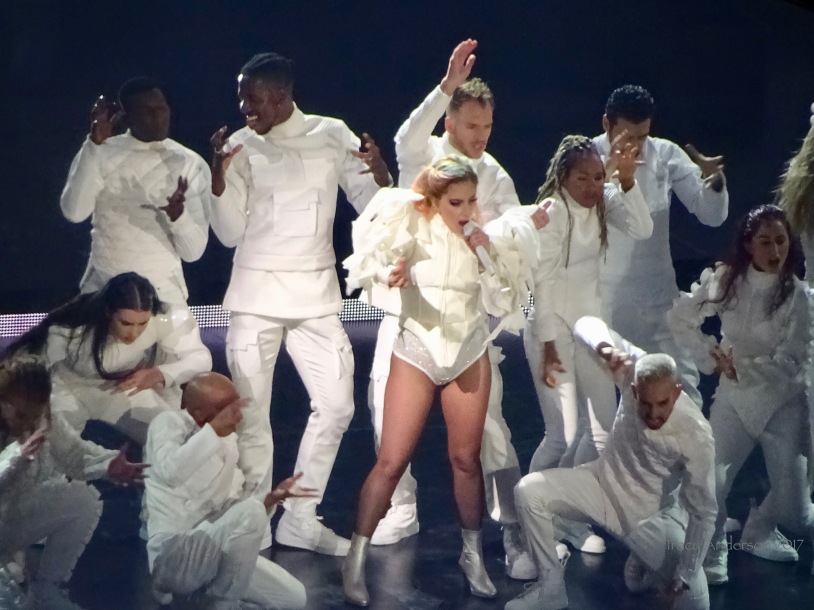 For more photos from this show, check out my Photo Gallery page.