A Brief History Of Everthing: Counting Crows and Matchbox 20 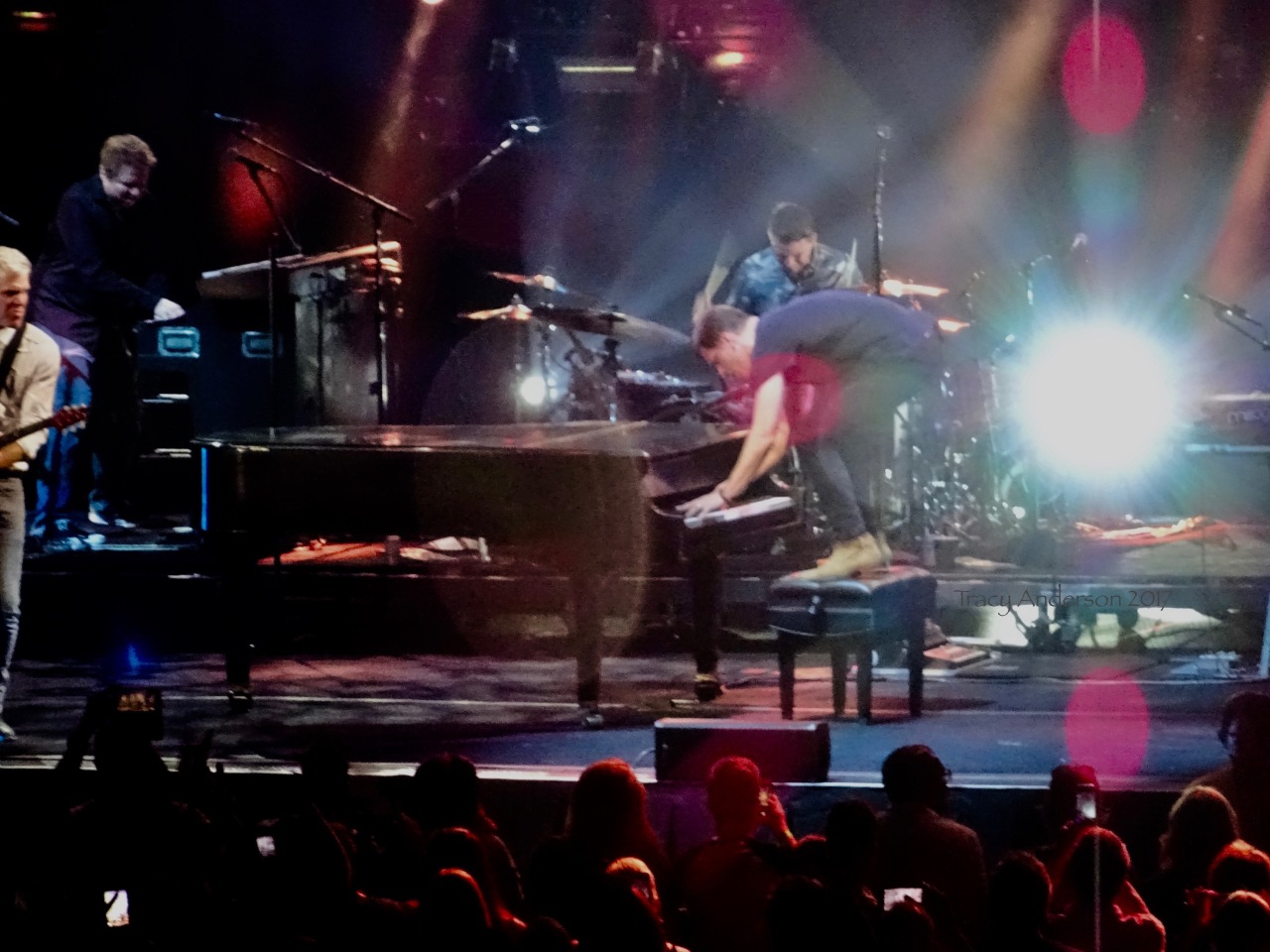 Edmonton July 14, 20017: Part two of my summer of concerts continues at Rogers Place, a mere four days after Duran Duran in almost the same seat, for Counting Crows and Matchbox 20 and their co-headlining tour: A Brief History of Everything.

Well, these two bands are just spectacular!  Rock Gods! If you haven’t seen this tour (which seems likely as it is only two shows in…) GO!!!!

What a fabulous night!  My friend and I were wondering how the two bands were going to organize the night.  I had previously seen Sting and Peter Gabriel (talk about your Rock Gods!) do one of these joint tour things and they did this real mash-up of the night where one would sing a couple of songs, then the other, then they’d sing together, then they’d sing each other’s songs, etc. We wondered if maybe the Crows and Matchbox 20 would do something similar, or if they would split it into their own sets.

They did their own sets.  The night began with the gorgeous vocals of opening act Rivers and Rust.  Then Counting Crows, followed by Matchbox 20. Somewhere in the night, Rob shared a story about how when they were deciding to be a band, they went to see the Counting Crows live and it just cemented their decision to do so. It is exceptionally poetic that the two bands are co-headlining now. 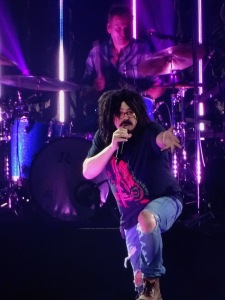 Counting Crows were utterly phenomenal. Amazing to watch. Full of energy and definitely gifted musicians.  In case you can’t tell yet, I love watching gifted musicians, especially those passionate about their gift, and both Counting Crows and Matchbox 20 fit this category.  It was pure pleasure to watch them.  Adam Duritz has a set of pipes on him like no other and he knows how to move around the stage.

In fact, part of my joy of going to concerts is taking pictures of the night, but I am an extremely amateur photographer and am not familiar with the best settings etc., so I end up with a LOT of blurry photos and miss the stellar moments of Rock Photography when lighting, posing, and expressions all come together.  But with Counting Crows and Adam in particular, I was getting amazing shot after amazing shot (at least so it looked on the small digital screen :D).  I was thinking to myself, yay I finally have a handle on this camera! I mean these came out so clear! 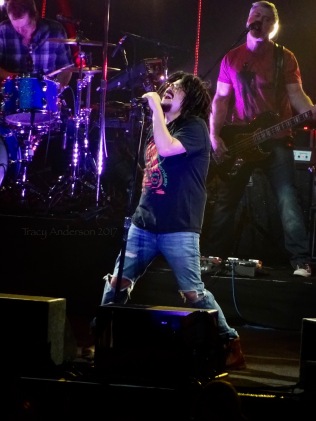 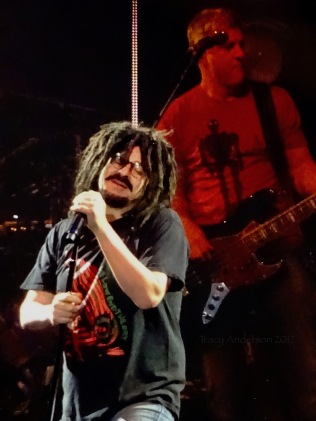 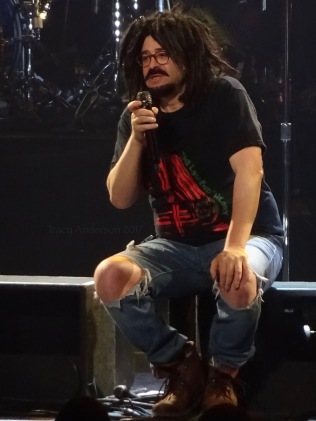 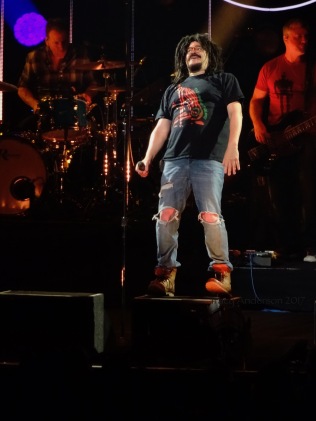 Adam Duritz Free Fall Counting Crows Rogers Place Edmonton July 14 2017
I have to admit, though I love the Counting Crows, I am less familiar with their music than I am with Matchbox 20’s.  I had the August And Everything After CD  back in the day and know a couple of the other hits.  Nonetheless, I was excited to see them live and was looking forward to the possibility of hearing Round Here, Mr. Jones and Rain King at this show. 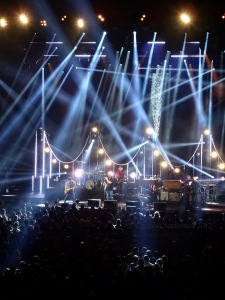 I think many in the crowd were in this same boat, and as their set went on, I was wondering when they would break into one of these more well-known numbers. Interestingly, Counting Crows did not play these songs until the very end of their set. 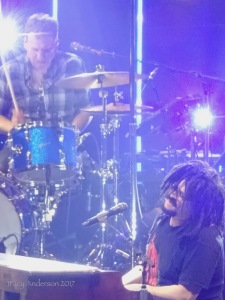 Interesting choice because it seems to be a concert rule that if, and when, you want to inject energy into a show, you play a big hit if you have them.  Especially a more lively hit – this gets people out of their seats and singing along.

That said, most of the set was on the more mellow side anyways, which, when combined with not playing those hits sooner, gave a different sort of energy to their set. A large portion of the audience sat throughout the majority of the show. (This continued in the few rows around me into MB20’s set as well, grrr!)   We weren’t singing along  or standing as a whole until those three songs came at the end.   I say all of this from my lack of familiarity with the other albums/songs (maybe those weren’t as deep of cuts as they seemed to me..) and from the perspective of my lame audience section – I had a friend in the upper bowl and he said his section had a great atmosphere (though maybe he meant atmosphere from the height of the seats :D). 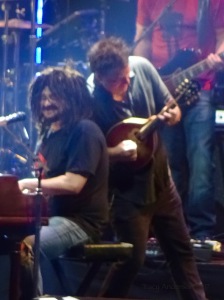 I kind of like this idea of ‘deeper cuts’ before the major hits as a change in pace.  Capital Cities did the same in their opener for Duran Duran, and as I mention in that blog post, it was nice to be won over by their music before realizing that I already knew who they were.

I’ve heard many a hard-core fan of other bands complain that their band plays the same big hits allll the time and how much they wish the band would play the deeper cuts.  It seems, at least from my perspective, that maybe Counting Crows were doing this with their set list – playing the lesser known songs first, which was lovely in itself, because they have some truly beautiful songs.   I particularly loved Colourblind, a song I have never heard before. It is lovely. Just stunning. And Goodnight Elizabeth. Equally mesmerizing performances of both.

Had they have played all the big hits interspersed throughout the set, maybe I wouldn’t have been paying such close attention to the others and would have missed their impact… Who knows? At any rate, they ended their set with Rain King, and all was well. 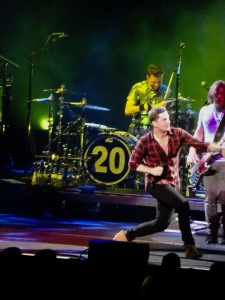 Like Counting Crows, Matchbox 20 were just mind-blowingly good. Like, freaking amazingly amazing.  This was a set of hit after hit that I knew well.  Push, 3 AM, Mad Season, Unwell, Disease, If You’re Gone, Back to Good, and more… Edmonton responded very well and we were finally on our feet, screaming, and singing along for most of their set. (Except the rows around me… I was even asked to sit down at one point 😭)

I love this band.  I feel emotionally attached to their music.  Ah well, I guess I’m emotionally attached to all my favourites…   They complete me… (heh heh!)  I have moved often in my life and I can usually associate music that was significant to me in location/timeframe.  They remain significant.  There is, essentially, a soundtrack to my life (it is a musical journey after all…).  Matchbox 20 are part of my BC chapter during the late 90s early 2000s. 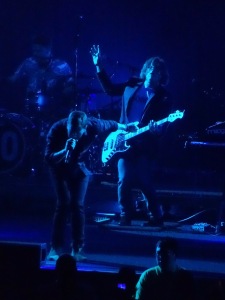 They were the background to many of my cousin’s and my shenanigans and late night discussions.  We listened to them frequently and she would joke that their song Unwell was her theme song (a la the tv show Ally McBeal): “I’m not crazy, I’m just a little unwell.” I still think of her every time I hear that song!  I get the feels just thinking of Matchbox 20 and this time in my life.

So seeing them in concert was pretty special on its own, but, damn, I just love the music so much!! and they really are Rock God good live… so freaking good!

And where I thought I finally ‘got’ my camera and all its settings, once Rob Thomas took the stage, I quickly realized that was due to Adam Duritz’s awesome stage skills and not my ‘growing’ photography skills.  Rob is a mad man on stage.  That boy is a firecracker!  A whirlwind of energy!  Even when he is standing in one place, he is bouncing… That mixed with the bouncing of the audience, I could not get a good focus with my lense fully zoomed, lol! 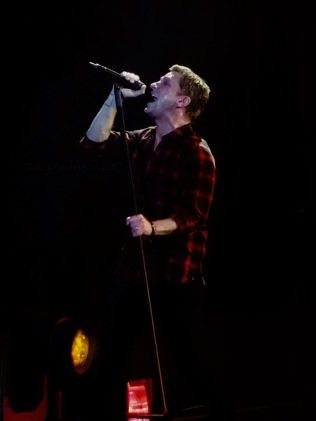 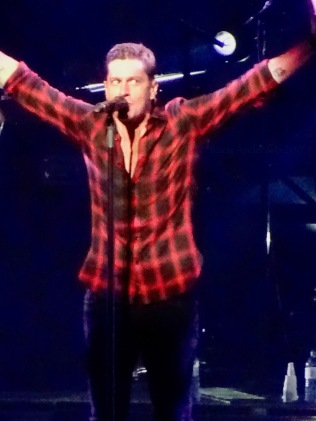 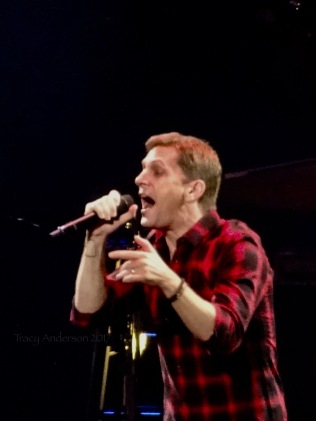 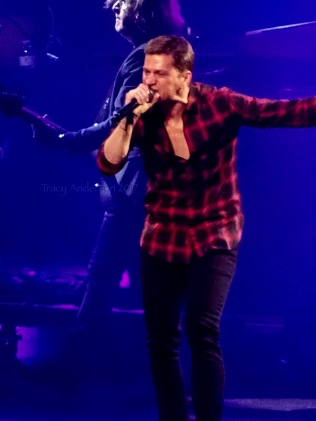 Actually the whole band (except the drummer 😂) all zoomed around on stage a lot, including one moment where one of the guitarists went on a walkabout and ended up  in the section next to ours…  they are also truly gifted musicians and performers.  I feel so lucky to be able to go to all these concerts of my Rock Gods.  Broke… but lucky!

The night ended with much applause and some wine… 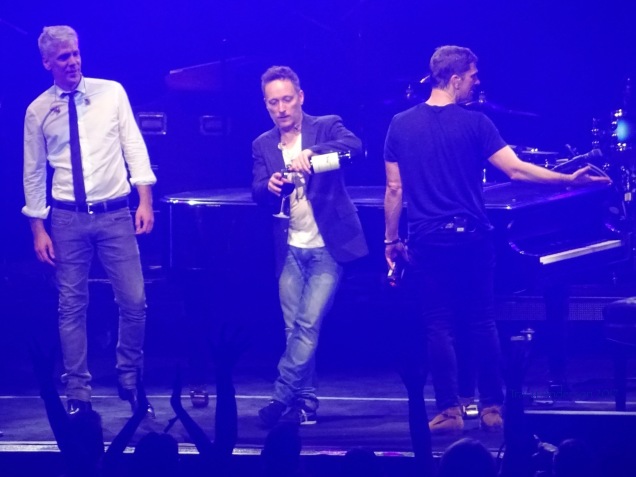 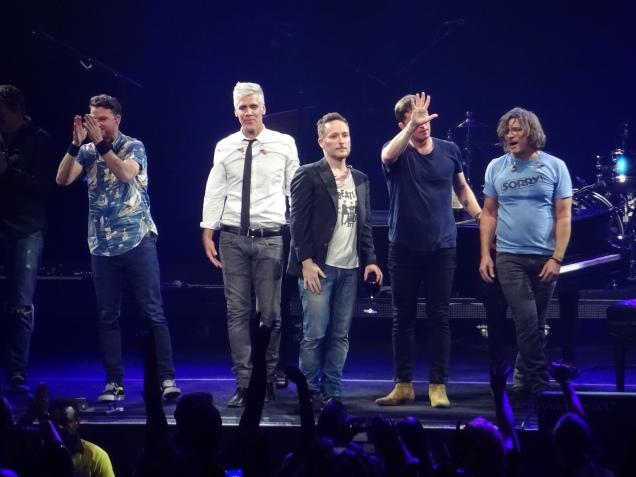 From the expression on Rob’s face during our enthusiastic response at the end of their set, I think he and the band appreciated us as well… And Jeez, both these bands with their piano songs!! My favourite photos of both. 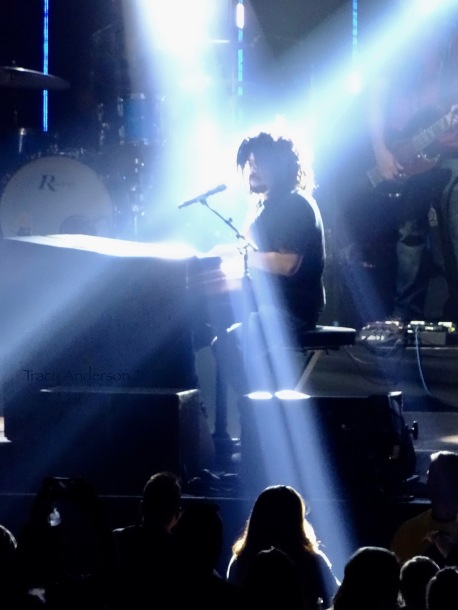 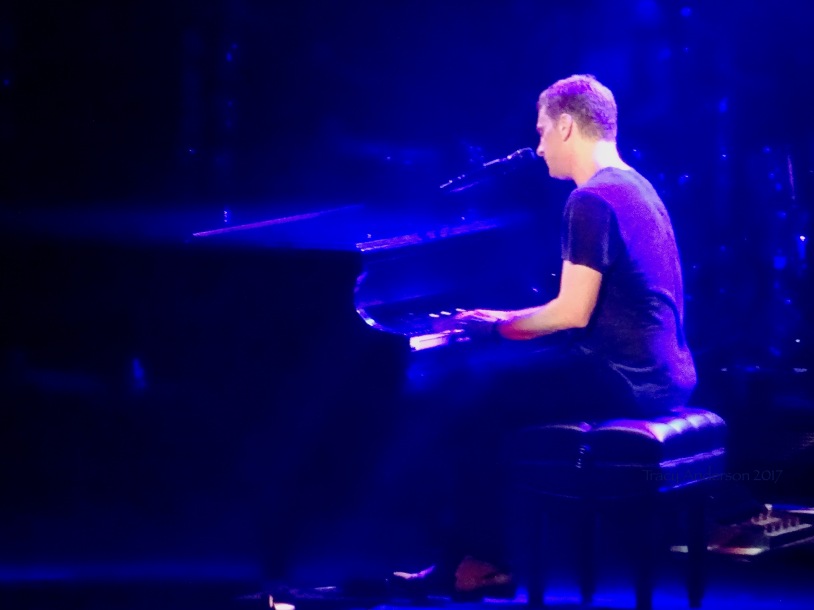 I have so many more photos of both bands  that I want to put in this post! I guess they worked out better than I thought! But for sake of space I’ll save them in my Gallery page. Please check them out!

As always, please share this post – I’d love to hear your thoughts.  Have you seen either of these bands live? What do you think of bands playing their deeper cuts live? For it, or would you rather hear their hits?