But I have no words.  No words at all.  What can one say about watching you in concert?!?!

I talk about U2’s music being the soundtrack of my life, and it definitely is – but your music has literally spanned my lifetime… Your first hit song, and my all-time favourite of yours, Your Song, came out in 1970, three years before I was born and I cannot remember a time when there wasn’t Elton John music on the radio, on Much Music, or in my life. 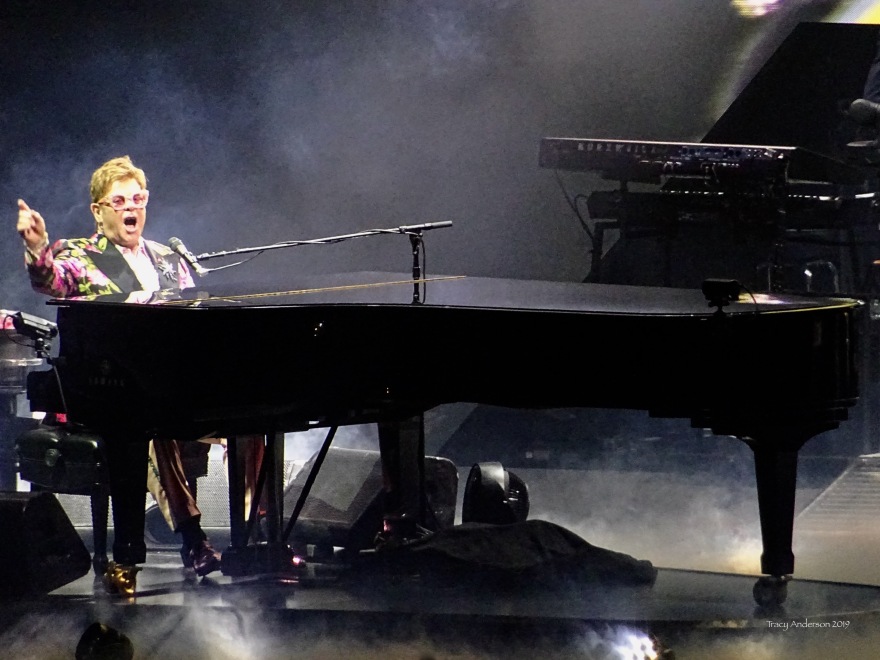 Indeed, I have vivid memories of pivotal Elton John songs and moments throughout my life.

This catalogue of songs… just wow.

My first career was in fashion design, and your theatrical style was inspirational to me.  You still are.  Glitter, sequins, the feathers, the glasses…  Iconic.  I even wore my sparkly sequin runners this night just because they are so fitting for an Elton John show! 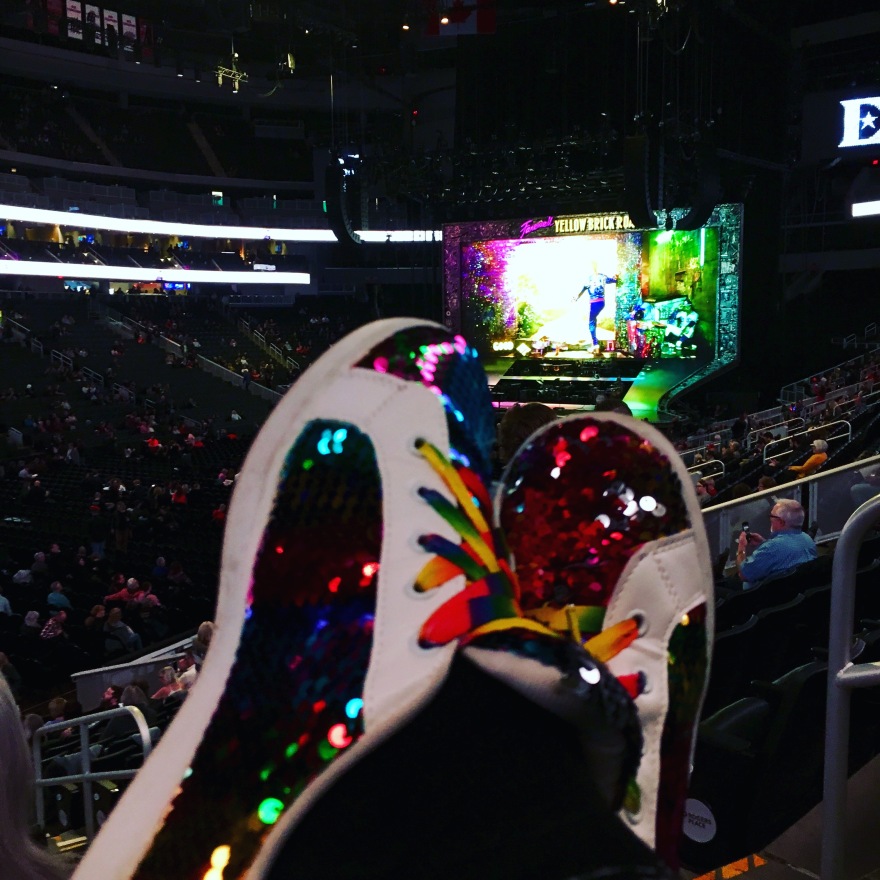 This concert was my first time seeing you live and you do not disappoint – though I was expecting more costume changes for some reason!  The stage imagery was as bright and colourful as I would expect from an Elton John show, yet also as moving and heartfelt as fitting the songs.  The videos and photos of Marilyn Monroe during Candle In The Wind. The stunning imagery of Rocket Man.  The chandelier…. you moved us. 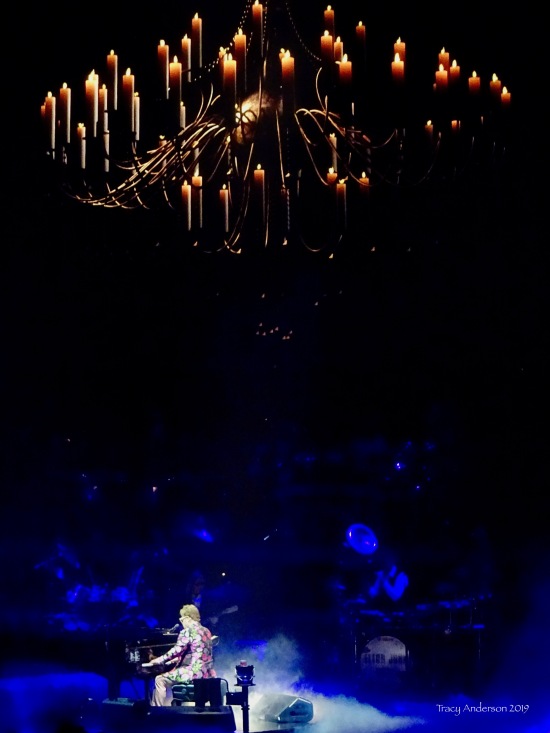 And while all of the musicians in the band were phenomenal, this drummer was a show unto himself! WOW! so dramatic and fluid, he played every song like it was a dance, every strike was a statement.  He was incredible!

And then there was you at the grand piano.  I think it never ever ever occurred to me just how brilliant of a player you are until seeing you live.  Usually when I listen to your music I am listening to on the radio or Spotify, just listening, not watching.  Just hearing your voice, the words, and the music as a whole.  But this night, I SAW you.  Saw you at the piano, your hands moving across the keys like magic.  And you played several songs without other instrumentation or vocals and some with just your voice and that gorgeous piano.  And it is chilling to see and hear such a thing.  Shivers down my spine.  Such talent.  Beautiful.

And having that piano move from one side of the stage to the other and back, while you played… super cool!

It thrills me to no end that both of your two nights in Edmonton were sold out.  It speaks to the power of your music and how we love you.  And we do.  I mean, I wasn’t there for the second show, but the first night audience absolutely adored you (I’m sure the second nighters did as well).  It was a great crowd.  I hope you could feel the energy we sent you.

It was a wonderful night, I loved when you stopped to tell us many stories along the way, hand reaching across the piano.  Stories about your and Bernie Taupin’s song, Border Song, being covered by Aretha Franklin, your AIDS Foundation and how things have changed due to meds now available.  Thank you, for all you do in this.  You helped change the world. 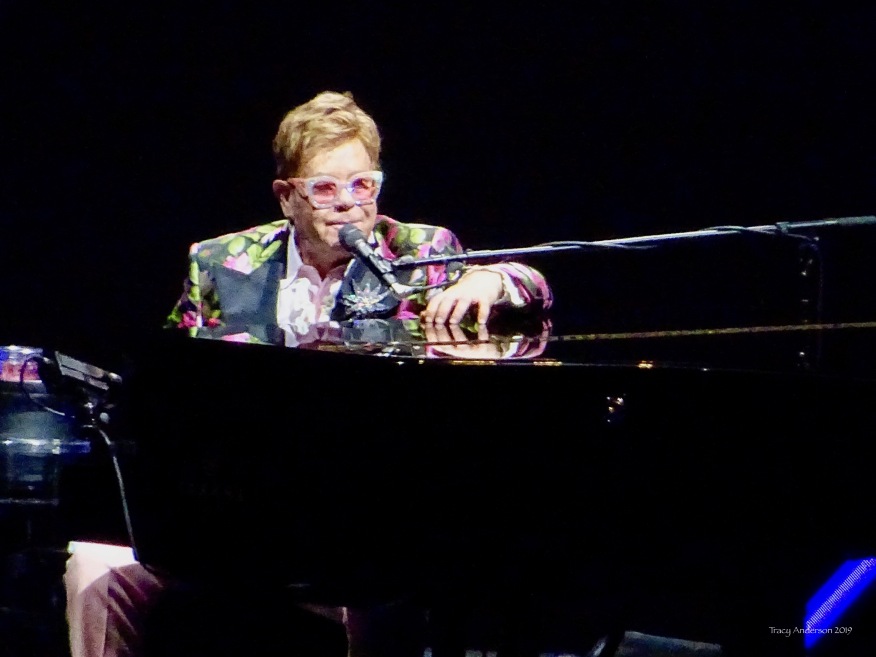 I count myself very blessed to seen this, my first, and one of your last, shows.

So, Farewell, Yellow Brick Road indeed.   Fare The Well.  And thank you for the music (and the fashion).

(There are more photos here.)

Bennie and the Jets
All the Girls Love Alice
I Guess That’s Why They Call It the Blues
Border Song
Tiny Dancer
Philadelphia Freedom
Indian Sunset
Rocket Man (I Think It’s Going to Be a Long, Long Time)
Take Me to the Pilot
Sorry Seems to Be the Hardest Word
Someone Saved My Life Tonight
Levon
Candle in the Wind
Funeral for a Friend/Love Lies Bleeding
Burn Down the Mission
Daniel
Believe
Sad Songs (Say So Much)
Don’t Let the Sun Go Down on Me
The Bitch Is Back
I’m Still Standing
Crocodile Rock
Saturday Night’s Alright for Fighting 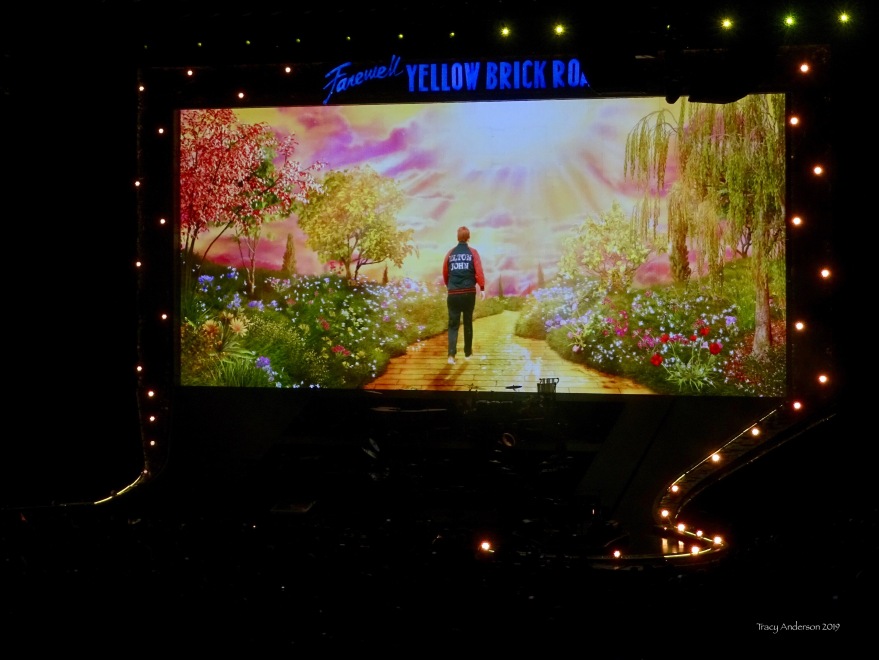 Ok, I guess I had some words…