I can remember the exact day I became a fan of Morrissey.  Well, not the exact date – but it was in December 1992, the day I moved into staff residence at Panorama Ski Resort.  One of my new roommates was a huge fan and as we hung up her ginormous poster of Bona Drag in the living room, she introduced me to The Smiths and Morrissey.  I don’t recall having ever heard them before, but I remember loving this music instantly. I was a vegetarian at the time, due to my love of animals and not wanting to hurt them, so my roommate played Meat Is Murder for me.  She played everything for me:
This Charming Man
There is a Light That Never Goes Out
Heaven Knows I’m Miserable Now
The Boy Withe The Thorn in His Side
Please Please Please Let Me Get What I Want
The Queen Is Dead
Stop Me If You Think You’ve Heard This One Before

But my favourites were immediately Girlfriend In A Coma and Last Night I Dreamt That Somebody Loved Me.  And, of course, Everyday is Like Sunday and How Soon Is Now.

I fell in love at first note with this voice and this poetry.  Dark, sad, haunting, beautiful.  Melancholic melodies.  I still love it.  Morrissey has one of those pure, velvety voices that just breaks my heart, it draws out all my emotions and draws me into the songs on a level that few others do. 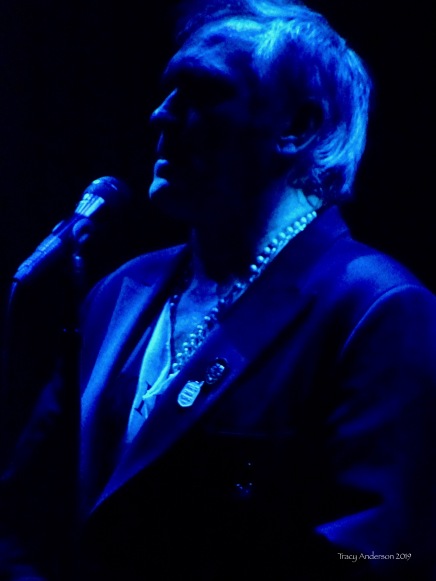 So, as is my way, when I found out that Morrissey would be coming to the Northern Alberta Jubilee Auditorium in Edmonton in concert, I just had to go!  Originally due to take place this past April, a medical emergency led to the postponing of this show until October 10.  I don’t know what the medical emergency was, but Morrissey was in fine form this night. 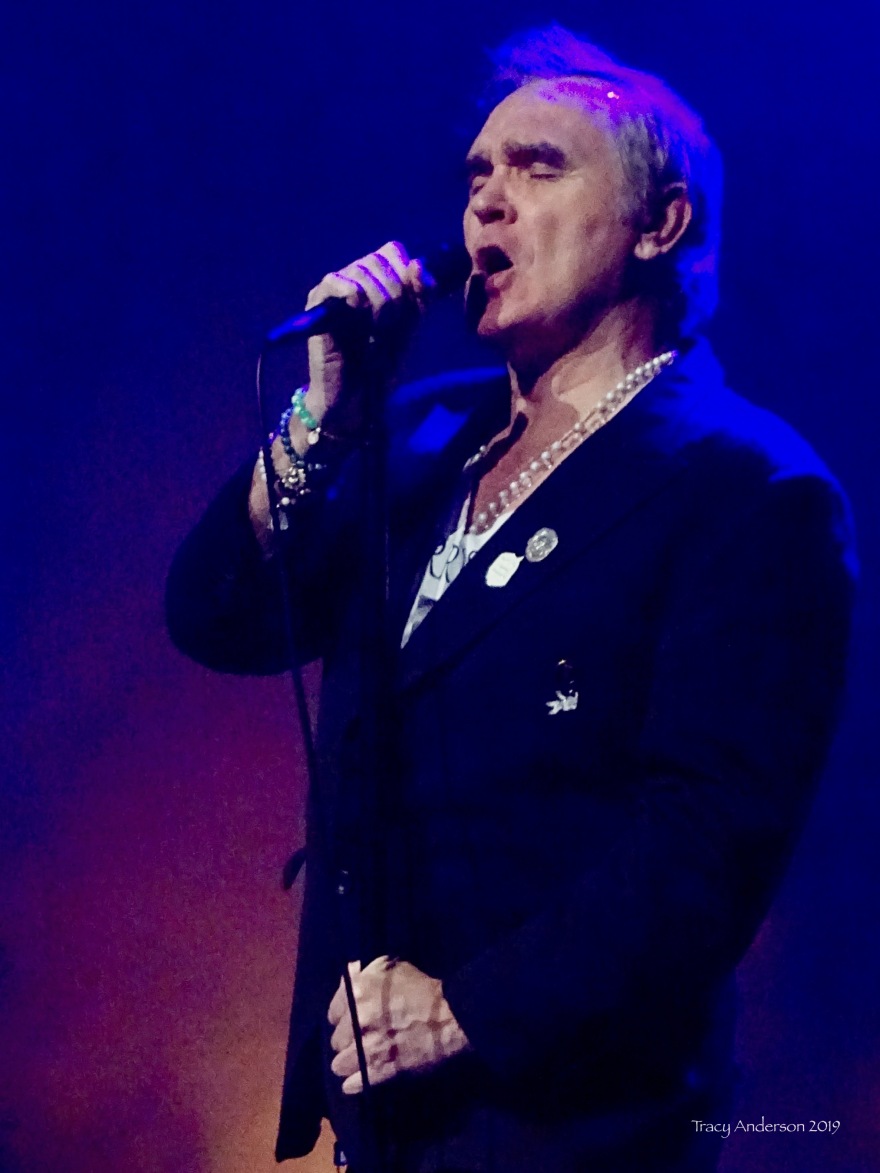 The opening act was a playlist of music videos/performances by David Bowie, the Ramones, even a Morrissey song, and more.  It also included a lengthy but amusing snippet of a black and white film where the cops are about to arrest the character called Morrissey. 😀

And then Morrissey and his band came on stage and began the concert with Suedehead. Everyone jumped out of their seats and the vast majority of us stayed standing for the whole show.  I really wasn’t expecting that – I thought it would be a more sit down pace!  But apparently Edmonton loves Morrissey.

In fact, at several points throughout the night people shouted out, “I love you, Morrissey!”  To which he shouted back, “I know!” and “It will pass!  If you don’t scratch it, it will go away!”  He was absolutely This Charming Man throughout the night. Noting that the stage was slippery, so if he ended up “A over T,” we were all welcome to laugh at him…

Third song of the night was the powerful How Soon Is Now.  This song has one of the absolute best opening notes/riff ever! And I will, for ever and ever, associate this song with the TV show Charmed (the original).  It’s one of my favourite TV shows of all time and I loved having this song as theme song… Hearing it every week, that opening riff… Broke my heart when they stopped using it.

I think it was at the end of How Soon is Now when the drummer took to the bigass standing drum and beat the crap out of it.  It was gorgeous, dramatic. Red.

There were a number of covers in the setlist, including Back On The Chain Gang by the Pretenders.  There were not a lot of the super big hits (or at least the ones I know of), just Suedehead, How Soon Is Now, and to close out the main set, Everyday is Like Sunday.  But they weren’t missed.  I mean, I would have loved to hear them and sing along, but the night was not disappointing without them.  The songs that were played were wonderful.  Morrissey sounded incredible; his band, top notch.  The lighting and rolling-in smoke, effective.  The images on the video screen, entertaining and at times disturbing (the bullfight, the end dude blowing his brains out on repeat), as is Morrissey’s way.

All in all, it was a brilliant night, including the length of time Morrissey took to sign things for fans in the midst of the show – we all just waited patiently for him to finish, it was lovely.  The intimacy of the smaller venue led to a feeling of closeness between audience and band. It just fits with that sensuousness of Morrissey’s music.

For the encore, Morrissey changed into a shirt that I think is a picture of Bruce Lee, but had Edmonton written across the top, and then the date and his signature.  Strange, you might think, for him to wear such a thing, but after the last song he stripped it off, wiped the sweat of his head, and threw it into the crowd – someone now has a nice souvenir of the night 😀

More photos in the Gallery.

Setlist (thanks to setlist.fm)

Suedehead
Alma Matters
Hairdresser on Fire
How Soon Is Now? (The Smiths song)
I’m Throwing My Arms Around Paris
Morning Starship (Jobriath cover)
Wedding Bell Blues (Laura Nyro cover)
Lady Willpower (Gary Puckett & the Union Gap cover)
I Wish You Lonely
Why Don’t You Find Out for Yourself
Munich Air Disaster 1958
Back on the Chain Gang (The Pretenders cover)
Seasick, Yet Still Docked
That Joke Isn’t Funny Anymore (The Smiths song)
Irish Blood, English Heart
First of the Gang to Die
Home Is a Question Mark
The Bullfighter Dies
Jack the Ripper
Some Say (I Got Devil) (Melanie cover)
Everyday Is Like Sunday