The Ticket Industry Part One:  Primary and Secondary Markets 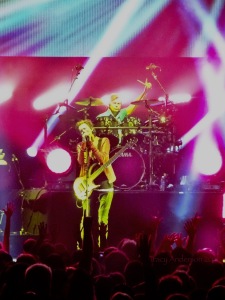 It seems that fans have always been battling nefarious forces for tickets to see their favourite concerts, sporting, and other entertainment events.  Before the internet, we had to line up outside of Ticketmaster locations and hope that the scalpers didn’t get there first.  When telephone sales came in, entrepreneurial souls figured out how to create programs that dialled in faster than humans.  And now, with the Internet, us ‘real people’ have to compete with the many automated ticket bots that buy up thousands of tickets instantly, only to be sold seconds later on resale sites at ‘market demand prices.’

This war between bot and human has led Ticketmaster to develop new methods, such as the Verified Fan process, for sorting the bots and scalpers out of the ticket buying process before tickets go on sale.    The bumps and bruises associated with breaking in the new processes have made their way in epic proportions to the U2 fandom, with fears of the unknown and rumours of possible Taylor Swift style ticket sales running rampant months before any official announcement of the latest tour was made.

The rumours and tribulations led me, as U2 fan and research geek, to dive into the vast depths of the Internet to try to understand the new system (Verified Fan), it’s benefits, and why what seems like a great idea on the surface (Fight the bots!) can go so terribly wrong.

Well, little did I know that what I would find would be a bottomless rabbit hole of information and intrigue into this opaque industry, which seems to be constantly changing, but staying the same.

In effort to make sense of the rabbit hole, I’ve arranged all this information into two companion posts.  Below is Part One of my findings: a sort of Intro to the world of the ticket industry and its primary and secondary markets.  It is the background that sets the stage for Part Two, which looks at the problematic Verified Fan process and other ways artists and Ticketmaster are trying to get the tickets into the hands of fans through the primary market, or at to least improve the ticket-buying process.

I should begin with two caveats:

The World of Ticket Markets

The primary market works something like this: artist is going on tour; tickets go on sale; people buy tickets; people go to show.  Easy peasy, right? Nope, not so much.  To start, the number of tickets that reach the everyday fan is much lower than one might assume.

Only an average of 46% of all tickets make it to the general sale. In some cases, it’s much lower than that.  For example, a 2013 Buzzfeed article stated that one of Justin Bieber’s concerts only offered 7% of the tickets to the general sale (1,001 tickets out of about 14,000).

According to that same article, another from the New York Times, and the below CBC Marketplace video, a large number of tickets are held back for credit card pre-sales, fan-club pre-sales, industry and artist friends/family/VIPs, promotional tickets to radio stations, and so on, leaving less than half for the general sale.  Some examples:

The tickets that are left for the general public are left for fans and their average computers and internet connections to battle it out with the scalpers, ticket brokers and their bots. (I am using scalper, broker, and tout interchangeably to mean anyone who buys and sells tickets in the secondary market at inflated prices.)

And by the way, those scalpers, brokers and bots make their way into the pre-sales as well…  A large number of pre-sales can be accessed by anyone with little effort. Create a Live Nation account and they will notify you of pre-sales for concerts in your area.  Like your favourite artists on Facebook and if they have a Facebook pre-sale, you can get the code.  Sign up to official fan clubs and you may get their codes too.

The Primary Market also contains ‘Premium,’ Platinum,’ and VIP Package tickets that are usually amongst the best seats in the venue and are priced closer to market demand prices.

The secondary market technically involves any time a ticket already bought in the primary market is resold to another party; this includes fan-to-fan sales where fans sell their tickets to other fans at face value because life happens and they no longer need/want/can use their ticket.  However, it is the scalper/broker/bot business that truly drives this market.

The rule of the game is whoever gets to the primary market first wins (i.e. gets the tickets at face value).  Fans that get there first use their tickets, keeping things in the primary market (unless that fan-to-fan situation arises). Scalpers, on the other hand buy at face value and then sell for a considerable profit in the second market.  To help themselves win the game, brokers created the bots to buy tickets at a speed much greater than the average fan.  (Apparently, one broker and his/her bot managed to buy more than 1000 tickets per minute.)

And it gets worse, confident of their ticket-buying abilities, scalpers now take part in the very devious practice of ‘speculative listing’ or ‘speculative tickets.’  Essentially, scalpers place ‘tickets’ on secondary market sites before they have even gone on sale, sometimes mere minutes after the tour is announced.  The touts are speculating which tickets they will actually get and selling them in advance for market demand prices.  The practice is fraudulent and illegal in many places.

Secondary market sites, such as StubHub are often advertised as a safe place for fan-to-fan sales.  Unlike Kijiji or Craigslist type sites, these sites are designed specifically for ticket resales.  The websites promise to verify that the seller has the ticket (I’m not sure how speculative listings are allowed on these sites, as clearly the site cannot verify a ticket that does not yet exist…) and provides the technology for a secure monetary transaction, all for a fee and/or a cut of the selling price.

It’s a great idea for those instances where fans with tickets have a change of plans or something happens and they cannot use their tickets.  It’s great for fans who couldn’t get tickets in the primary market but still want to go to the show.

The problem is that these sites are used primarily for scalping – those fan-to-fan sales are mostly scalpers to fans.  StubHub even rewards high-volume resellers by offering “special software to upload and manage huge inventories of tickets” and other incentives, such as lowering the percentage of StubHub’s cut in the sale.

And while they may promise ticket verification and purchase security, and are generally a lower risk for fraudulent sales than some guy/lady on the street or Kijiji and Craigslist, ticket scams do make their way onto these sites (though it is rare).

Ticketmaster sells their resale tickets along with the primary market tickets, and in my experience, even prioritizes the resale tickets by offering them first (though the TicketsNow website says they don’t do this…).

On some event ticket pages, the buyer can choose whether or not they want to see the resale listings (you can click / un-click a box under ‘Type of Ticket’), but the default setting is to show the resales with or above the primary tickets, leaving unknowing fans thinking they are all primary market tickets.

However, the fact that Ticketmaster is in the secondary market business is a questionable practice and would seem to place them in a conflict of interest. Do they truly want to get rid of scalping if they are in the biz themselves and making commissions off of this $8 billion industry?  What benefit do they have to truly develop the technology, make the rules, do whatever it takes to stop the secondary market and get those tickets into the hands of fans right of the bat? At least, I guess, they don’t allow speculative tickets on their site.

And in case anyone thought artists were all above this game, they are not.  Katy Perry and Justin Bieber (or their managers) have been known to scalp their own tickets.  Kid Rock has done it too.  The intriguing thing about artists scalping their own tickets is that they are often the ones who set the ticket price (not including distribution, etc. fees).

Music is parallel with emotion.  We love our Rock Gods and we love seeing them live.  It can be kin to a religious experience, but there is nothing else in the world like it.  The secondary market preys on those emotions, especially when the artists are super popular or, as in the case of The Tragically Hip, never to tour again.  The scalpers know people will pay top dollar for those emotions.  And where there is demand and a willingness to pay, there will always be an opening for a market.

The question then becomes, how do we close the market, or at least put up protections against actions that take advantage of people beyond fair practices and society’s acceptable behaviours? A question for Part Two!

I find this such a fascinating industry, there is just so much going on, so many players, relationships between the players and rules of the game.  I didn’t even get into how ticket prices are decided!  (If you are curious about this, here is an article on the breakdown of costs that are paid by the face value price of concert tickets.)

If you are as fascinated with this topic as me and want to read about what the industry is doing to fight the bots, improve the ticket-buying experience, and get tickets into the hands of fans, and whether it is working, check out Part Two.