So a crazy thing happened a while ago – one of the Facebook Tea Party groups I belong to (The Tea Party Fan Network) put up a contest to win Jeff Martin’s latest solo EP release, Stars In The Sand… No that’s not the crazy thing, thats the awesome thing.  The crazy part is that I won!

We had to state where we would choose to listen to the EP for the first time.  I merely said: “Morocco, because that is where the inspiration came from.  On the beach, with nothing but the sound of that ocean and this EP (or, you know, a live performance on the beach would be awesome too…)”

And the judges, whoever their lovely souls may be, chose me! (And 3 others.) Crazy!  So far the EP is only available in Australia (possibly only at Jeff’s shows, though I could be wrong about this). So yay me 😀 New Jeff music! 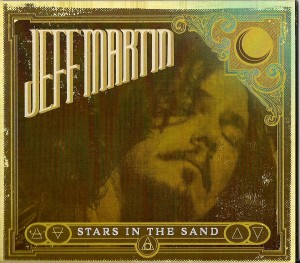 And now that its arrived from Australia (well, like three weeks ago, but its been a weird summer..) of course I gotta blog my thoughts!!

Now that I have my trusty, awesome Beats headphones, my favourite thing to do with new music is to put those bad boys on and just listen. No distractions. Just listen. Up close and personal, music right in my ears, to all the wonderous sounds assaulting my brain and heart.

I am not on a beach in Morocco, and this is not a live performance (dammit), but it’s been me, this EP, and my headphones for those three weeks, and now I am ready to review this baby!

First, I should probably be honest and say there is close to no way in the world I will ever write a bad word about Jeff Martin, either as a solo artist or with The Tea Party. I love this man’s voice. It does things to my soul. He could sing the telephone book and I would be in la la land. He is the voice that prompted this blog. I adore him (and the rest of The Tea Party boys).

Music Fangirl Confession #7: I have to admit that it is with a little trepidation that I first listen to new music by my favourite rock gods – those I cherish wholeheartedly, especially when, as in the case of Jeff and The Tea Party, I have loved them for years and years.  Its this weird juxtaposition between knowing I’m going to love the new music because of that history with them (e.g having loved every single piece of music before this release is a really good track record to bet on… knowing that I would be happy with a phone book sung to me is also a pretty good thing to bet on… :P) and yet a concern nipping at my core: what will this music be? Will I love it? What if I don’t love it? What if my rock gods lost the plot? What if I’ve lost the plot!? Trepidation.

There’s also a sense of wanting my rock gods to do well, wanting their new music to do well.  I worry for them.  I believe they put their heart and soul, blood, sweat and tears, all those cliches, into their music; and I very much believe releasing your art can be like releasing a part of your soul for anyone to see… So I worry for them – will others like this new music?  What if it flops?  What if people don’t like it!? – Especially now that I’m writing reviews… what am I going to say if I don’t love it!  It’s stressful! 😀

So my stomach clenches a bit and my heart pounds as I press play on this new Jeff EP.  Please let me love this!  Of course I’m going to love it – its Jeff and I already know it was inspired by Morocco so the possibility of a middle eastern influence, which I love, seems highly likely.

The first notes ring out softly. A bit of scratch guitar. It’s a slower song, emotional straight from those notes.  And then Jeff’s voice: “How do I begin?” This is good. This beginning, Jeff, you begin like this. Why was I even worried?

I tell you, this voice. Though Jeff can belt songs out in a growl and a yell like nobody’s business, this clear, pure voice is my favourite. There is such richness and depth to it that reaches down deep.

“There are stars. There are stars in the sand, my love”… Soft. Emotive. Romantic. Lovely.  Sigh.  “They are shining in your eyes.” Hi Jeff, here’s my heart, just rip it out of my chest why don’t you? You and your beautiful words and lovely voice. Yet, its a nice ripping. I can feel my body soothing, melting into this chair in all this beautiful emotion. Lulling me into this serenity of love. Yes, I am a sap. I love a good love song.

Oh there. Yes. That. The wavering notes of, I think, a wind instrument, opening To The Forces. Ahhhh yes, the drums now. This rhythm. Here we go with the middle eastern influence, sigh. I can close my eyes and I am on that beach, waves crashing in time. Or marching through the markets of Marrakesh. On our way to the forces.

I love the instrumental breaks in this song.  Like really really love them. The rest of the song is very melodic, it’s lovely.  But I also kind of wonder what this song would be like with a faster tempo.

The Last Dance. This is probably my favourite song on the EP – this is full on middle-eastern, and with a good strong tempo.  The drumbeats in this song are divine, switching intensity back and forth.

And, you know, Jeff’s voice.  Can we talk about how awesome he sounds in the song? Where’s that phonebook?  Please.  Please, could you sing that to me too??  That break in his voice towards the end when singing just the word ‘you’…Yup.  Wow.

Ok.  so it’s not a bad word about Jeff, I promise.  But I have to say I have this thing about  old songs being added to new records.  I’m not a fan… I am selfish and want new music on new releases, remakes of others’ songs, that’s great, but a remix or re-release of one’s own work, just not a fan. Especially on an EP. There is such limited space – I want all new material. Selfish… I told you.

At least that’s how I normally feel and why I had a moment of disappointment when I first read the track list on this EP and saw The Ground Cries Out, a song from Jeff’s 2011 album of the same name.

But then the song plays…

And it is not at all like the original. That one (the original) starts with seconds of a soft entry but quickly moves to heavy percussion. A banging of drums. Boom! Boom! Boom! Boom! The other instruments pick up with the same ferocity. As does Jeff. Its loud. And stays loud. The sound of the ground crying out. On the new EP, the song starts with similar softness, but it carries on longer, easing into the drumming and super quick tempo. It sounds like the percussion is all hand drums, lending a much stronger sense of that middle eastern sound.  The original has that influence, but definitely has a harder rock mix.

It is so different for me that it has a feel of being new.  My qualms of being cheated the space for a new new song are appeased.  (Not that I want all EPs to have remixes but in this case, I am won over.)

It occurs to me as I write this review that this EP is organized by tempo – I don’t know if its intentional, but it starts slow with Stars in the Sand and incrementally picks up pace with To The Forces, then The Last Dance, until the super fast The Ground Cries Out. A journey through tempo.

The EP ends with Hilal, bringing back the scratch guitar and slow beautiful pace of the opening titular song; completing the circle of the EP, if you will.  Which is an intriguing thought considering that ‘Hilal’ is Arabic for crescent, a circular shape :D; and denotes “in particular the crescent Moon visible after a new Moon, determining the beginning of a month.” yup, completing the circle.  The meaning also closes out the astronomical, astrological theme set by the EP title and first song: Stars in the Sand.  All that from an instrumental.  A beautiful, soulful, peaceful instrumental.

All of which is a very long way of saying I love this EP.  It brings about all the things I love about Jeff Martin’s music and makes me wish so very very hard that I could have been in Australia to see him play it live.  Or that I could get myself to Vancouver for the recently announced shows in October (the 19th and 22nd)!

I guess I shall have to wait (im)patiently for the upcoming Tea Party release and tour (please please come back to Edmonton!!) – that new beginning brought by Hilal, perhaps :D.